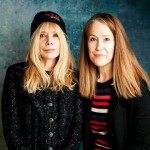 Broadcasting from the Sundance Film Festival in Park City, Utah, today’s show looks at a new film that is forcing the movie industry to look closely at itself. It’s about the rise and fall of a movie titan who once used Sundance as a hunting ground: movie mogul Harvey Weinstein, who has been accused of rape, sexual assault or misconduct by more than 75 women.

“Untouchable”: Women Testify to Harvey Weinstein’s Decades of Sexual Abuse in Powerful New Film
Broadcasting from the Sundance Film Festival in Park City, Utah, today’s show looks at a new film that is forcing the movie industry to look closely at itself. It’s about the rise and fall of a movie titan who once used Sundance as a hunting ground: movie mogul Harvey Weinstein, who has been accused of rape, sexual assault or misconduct by more than 75 women. The film “Untouchable” takes on Harvey Weinstein’s decades of predatory behavior and the system that allowed it to happen, through the stories of survivors of his abuse, from his time as a young music promoter in Buffalo in the 1970s all the way until a series of investigations toppled Weinstein in 2017. The stories of accusers, from Gwyneth Paltrow to Salma Hayek to Angelina Jolie, rocked Hollywood, sparking the Me Too movement. More than a year after this public reckoning, Weinstein now faces five charges that could land him in prison for life, including rape and predatory sexual assault. Weinstein has just hired the former lawyers of one of his most public accusers, actress Rose McGowan, who says Weinstein raped her at Sundance in 1997. His trial is expected to begin in May. Just two years after Harvey Weinstein joined the Women’s March in Park City, “Untouchable” premiered at Sundance on Friday. Democracy Now! sits down with the film’s director, Ursula Macfarlane, the day after the premiere.

Exclusive: Ex-Harvey Weinstein Employee Breaks Silence on Her Memo That Helped Take Down Movie Mogul
In her first television interview, Democracy Now! speaks with a woman who helped topple Harvey Weinstein and expose his rampant sexual abuse but who has remained largely behind the scenes until now. Lauren O’Connor was a literary scout at the Weinstein Company who worked closely with Weinstein. In 2015, she penned an internal memo about her boss that would later become famous. In it, she wrote, “I am a 28 year old woman trying to make a living and a career. Harvey Weinstein is a 64 year old, world famous man and this is his company. The balance of power is me: 0, Harvey Weinstein: 10.” This memo was later leaked and would eventually become the bedrock of the 2017 New York Times investigation that first exposed Weinstein’s decades of abuse. Lauren O’Connor tells her own story for the first time in “Untouchable,” a damning documentary about Weinstein’s abuse of power through the eyes of the women he targeted, that premiered at the Sundance Film Festival on Friday.