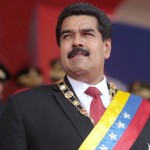 What’s Next for Venezuela as U.S. & Opposition Reject Negotiations Aimed to End Crisis Peacefully?
Venezuelan President Nicolás Maduro has reached out to Pope Francis, asking for his help to bring about a peaceful solution to the crisis in Venezuela. Maduro is facing increasing international pressure to resign from office two weeks after opposition leader Juan Guaidó declared himself to be Venezuela’s interim president. Guaidó made the announcement on January 23 after speaking to U.S. Vice President Mike Pence, who offered support from the Trump administration. Since then, a growing number of countries have openly recognized Guaidó’s claim to the presidency, including Austria, Britain, Denmark, France, Germany, Spain and Sweden. Italy has blocked a European Union statement recognizing Guaidó, and Ireland and Greece have called for new elections but have not recognized Guaidó’s claim to the presidency. Meanwhile, the Venezuelan opposition and the United States have rejected an offer by Mexico and Uruguay to host talks between the two sides. We speak to David Smilde, senior fellow at the Washington Office on Latin America and professor of sociology at Tulane University. And in California, Miguel Tinker Salas is a professor at Pomona College and author of “The Enduring Legacy: Oil, Culture, and Society in Venezuela” and “Venezuela: What Everyone Needs to Know.”

Trial of El Chapo Highlights Failure of U.S. War on Drugs, But Will U.S. Ever Be Held to Account?
Joaquín “El Chapo” Guzmán, the notorious Mexican drug kingpin, has been on trial in New York City for 11 weeks. A federal jury headed into deliberations yesterday after more than 200 hours of testimony at the Federal District Court in Brooklyn revealing the inner workings of the Sinaloa Cartel, the major drug trafficking organization run by El Chapo. Fifty-six witnesses took to the stand with stories of murder, violence, spying, widespread corruption and even one tale of the drug lord escaping arrest in 2014 by climbing naked through a sewer alongside a former lover. El Chapo faces 10 charges, including leading a criminal enterprise, and could receive life in prison in the U.S. if convicted. The trial concludes as Donald Trump continues to call for a wall on the U.S.-Mexico border, which he claims will help combat drug trafficking. However, government data shows most of the hard narcotics seized by Customs and Border Protection come at legal ports of entry, not from people trying to secretly cross the southern border. Christy Thornton is an assistant professor of sociology and Latin American studies at Johns Hopkins University, who says El Chapo’s sensational trial is obscuring the truth about the so-called war on drugs.