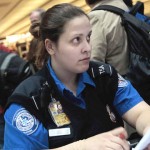 The partial government shutdown has entered its 20th day. On Saturday, it will become the longest shutdown in U.S. history if a deal is not reached. President Trump reportedly stormed out of a meeting with House Speaker Nancy Pelosi and Senate Minority Leader Chuck Schumer Wednesday after they refused to back a deal to fund a wall on the southern border.

From EPA to TSA, Agencies Devoted to Nation’s Health and Safety Are Going Unfunded During Shutdown
The partial government shutdown has entered its 20th day. On Saturday, it will become the longest shutdown in U.S. history if a deal is not reached. President Trump reportedly stormed out of a meeting with House Speaker Nancy Pelosi and Senate Minority Leader Chuck Schumer Wednesday after they refused to back a deal to fund a wall on the southern border. Schumer accused Trump of throwing a temper tantrum. Trump described the meeting as a “total waste of time.” Robert Weissman is the president of Public Citizen. The group just released a report titled “As Shutdown Drags On, Agencies Devoted to Consumer and Worker Health and Safety Unfunded and Deprioritized.”

Public Citizen: Frightening Prospect If an Authoritarian Like Trump Declares State of Emergency
President Trump says that he will likely declare a national emergency over the border wall if negotiations over the government shutdown continue. Robert Weissman, president of Public Citizen is interviewed. “The Congress has given the president quite a bit of authority to declare emergencies with terms that are almost unbounded,” Weissman says. “Congress has always expected, and society has always expected, that presidents wouldn’t abuse that authority recklessly, declaring emergencies just because they want to. We obviously have a president now who has no such constraints.”

National Parks Overflow with Trash, Human Waste as Gov’t Shutdown Approaches 3 Weeks
National parks around the country have seen overflowing toilets and trash piling up since the government shutdown began nearly three weeks ago. Park experts are now warning that the damage may take years to undo. Jonathan Asher, the government relations manager at The Wilderness Society is interviewed.

There Are Thousands of Cyntoia Browns: Mariame Kaba on Criminalization of Sexual Violence Survivors
Cyntoia Brown was granted full clemency by Republican Tennessee Governor Bill Haslam on Monday after serving 15 years in prison. The decision follows months of intense public pressure and outrage over her case. Brown was sentenced to life in prison after being convicted of first-degree murder for shooting her rapist as a teenager. She had been sexually trafficked and repeatedly abused and drugged. The shooting happened when Brown was just 16 years old, but she was tried as an adult. Mariame Kaba, an organizer and educator who has worked on anti-domestic violence programs, anti-incarceration and racial justice programs since the late 1980s is interviewed. Kaba is the co-founder of Survived and Punished, an organization that supports survivors of violence who have been criminalized for defending themselves. She’s also a board member of Critical Resistance.

Facing Mass Deportation, Haitians Sue Trump to Preserve Temporary Protected Status
A New York City trial is challenging the Trump administration’s attempt to end temporary protected status—known as TPS—for more than 50,000 Haitians living in the U.S. Tens of thousands of Haitians were granted TPS after an earthquake devastated their country nine years ago this week. In November 2017, the Trump administration announced it would revoke TPS for Haitians, sparking protests and multiple lawsuits around the country. Marleine Bastien, executive director of the Family Action Network Movement, or FANM, is one of the plaintiffs in the lawsuit. She testified on Wednesday as a witness in the trial.