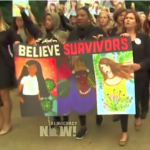 #MeToo Founder Tarana Burke on Sexual Assault Allegations Against Kavanaugh: “We Believe Survivors”
Two women have now publicly accused President Trump’s Supreme Court nominee Brett Kavanaugh of sexual assault, and at least 128 people were arrested on Capitol Hill Monday protesting his confirmation. “This is a time for us to not just show up via a viral hashtag, but in person with our feet to the street to say that we won’t be treated this way and we won’t stand for another survivor to be treated this way,” says Tarana Burke, founder of the “Me Too” movement, who called for the national walkout Monday in solidarity with survivors of sexual violence. Marcy Wheeler is an independent journalist who covers national security and civil liberties.

Marcy Wheeler: Rosenstein’s Ouster Would Not Necessarily Signal End of Mueller Investigation
Drama unfolded Monday when Axios reported that Deputy Attorney General Rod Rosenstein verbally resigned over the weekend amid mounting tension over the investigation by special counsel Robert Mueller into Russia’s role in the 2016 presidential election. Last week, Rosenstein and White House Chief of Staff John Kelly met at the White House hours after The New York Times reported Rosenstein had suggested secretly recording Trump in the White House and discussed recruiting Cabinet members to invoke the 25th Amendment to remove Trump from office for being unfit. But on Monday, Trump confirmed Rosenstein still has a job, and said the two are scheduled to meet this Thursday. “I think once Mueller got Paul Manafort’s testimony locked in … to some degree, it was too late for Trump to completely undermine this investigation,” says Marcy Wheeler, in response to concerns that the Trump administration could shut down Mueller’s probe. Wheeler is an independent journalist who covers national security and civil liberties and runs the website EmptyWheel.net.

Naomi Klein: A Year After Hurricane Maria, There Is Nothing Natural About Puerto Rico’s Disaster
One year since Hurricanes Maria and Irma killed thousands in Puerto Rico and caused the longest blackout in U.S. history, we are joined by Naomi Klein, author of “The Battle for Paradise: Puerto Rico Takes on the Disaster Capitalists,” whose recent report for The Intercept is titled “There’s Nothing Natural About Puerto Rico’s Disaster.” Last week, President Trump generated widespread criticism when he falsely claimed on Twitter that thousands of people did not die in the two storms, even as a Harvard study estimated the death toll may top 4,600. Meanwhile, on Monday, President Trump declared himself an “absolute no” on statehood for Puerto Rico as long as San Juan Mayor Carmen Yulín Cruz, a major critic of his administration’s response to Maria, is in office. Following is a discussion of the role of the unelected PROMESA fiscal control board in the island’s unfolding economic crisis, with co-host and reporter Juan González.