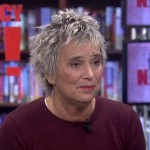 Opposition to Supreme Court nominee Brett Kavanaugh is growing across the country as the Senate prepares to vote on his nomination, just one day after senators were given their first chance to see the FBI’s new investigation into Dr. Christine Blasey Ford’s claims that Kavanaugh attempted to rape her when she was a teenager.

Eve Ensler to White Women Supporting Kavanaugh: Stand with Survivors & Fight This Nomination
Opposition to Supreme Court nominee Brett Kavanaugh is growing across the country as the Senate prepares to vote on his nomination, just one day after senators were given their first chance to see the FBI’s new investigation into Dr. Christine Blasey Ford’s claims that Kavanaugh attempted to rape her when she was a teenager. More than 300 protesters were arrested Thursday during a massive sit-in on Capitol Hill against Kavanaugh, who has been accused of sexual assault and misconduct by multiple women. The Senate is planning to hold a key procedural vote on his confirmation Friday morning. A final vote on Kavanaugh’s confirmation is expected on Saturday. The decision rests on four senators who have not yet announced how they will vote: Republican Senators Susan Collins of Maine, Jeff Flake of Arizona and Lisa Murkowski of Alaska, as well as Democrat Joe Manchin of West Virginia. Eve Ensler, award-winning playwright and author of The Vagina Monologues is interviewed. She is also the founder of V-Day, a movement to end violence against women and girls. She recently published “A Letter to White Women Who Support Brett Kavanaugh” in Time Magazine. She says to sexual assault survivors watching the Kavanaugh nomination unfold, “Your pain matters. Your experience matters. The trauma that you have faced matters. And there are many of us, many of us supporting you, loving you, holding you as you try to heal from this experience.”

Eve Ensler: Nobel Peace Prize For Mukwege & Murad Is an Award for Every Rape Survivor in the World
After a landmark year for the “Me Too” movement, which ignited an international conversation on sexual assault, the Nobel Peace Prize was awarded Friday morning to two champions of women’s rights who have built their careers fighting sexual violence: Physician Denis Mukwege and human rights activist Nadia Murad. Dr. Denis Mukwege founded the Panzi Hospital in the Democratic Republic of Congo in 1999. The clinic receives thousands of women each year, many of them requiring surgery as a result of sexual violence. Nadia Murad is a 25-year-old Yazidi Kurdish human rights activist from Iraq. She was kidnapped and held by the Islamic State for almost three years. During her captivity she was repeatedly raped. Eve Ensler is interviewed. She is an award-winning playwright and author of The Vagina Monologues and the founder of V-Day, a movement to end violence against women and girls. She is a good friend of Dr. Mukwege and has also worked with Nadia Murad.

Could Brazil Return to a Dictatorship? Glenn Greenwald on Possible Election of Far-Right Demagogue
Voters in Brazil head to the polls on Sunday in an election that could reshape the political landscape of South America. Polls show the current frontrunner is the far-right Jair Bolsonaro, a former army officer who has openly praised Brazil’s military dictatorship, which lasted from 1964 to 1985. Bolsonaro has a long history of making racist, misogynistic and homophobic comments, and has risen in the polls since September 8 when he was stabbed while campaigning. His campaign directly benefited from the jailing of former President Lula Inácio da Silva in April, who had been leading in all presidential polls before being forced to drop out of the race. Lula’s hand-picked successor, Fernando Haddad, is currently placing second in most polls. Glenn Greenwald is a Pulitzer Prize-winning journalist and one of the founding editors of the Intercept. He has been covering the election from Rio de Janeiro.