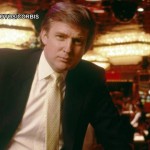 President Donald Trump built his personal brand and presidential candidacy on the claim that he was a self-made billionaire whose only head start was a “small loan of a million dollars” from his father.

NYT Exposé: “Self-Made Billionaire” Donald Trump Built Empire on Father’s Money, Tax Dodging & Fraud
President Donald Trump built his personal brand and presidential candidacy on the claim that he was a self-made billionaire whose only head start was a “small loan of a million dollars” from his father. But a New York Times exposé has revealed that Trump inherited much of his family’s wealth through tax dodging and outright fraud, receiving at least $413 million in inflation-adjusted dollars from his father’s real estate empire. David Barstow is interviewed and is a three-time Pulitzer Prize-winning investigative reporter for The New York Times and the lead author on the new investigation, “Trump Engaged in Suspect Tax Schemes as He Reaped Riches from His Father.” Barstow shares a byline with Susanne Craig and Russ Buettner.

ACLU Formally Opposes Kavanaugh, Citing Credible Sexual Assault Allegations & Partisan Temperament
The New York State Department of Taxation and Finance has opened an investigation into President Trump for fraud and tax evasion following a major exposé by The New York Times revealing that Trump inherited nearly half a billion dollars of his family’s wealth through tax dodges and outright fraud. New York City Mayor Bill de Blasio has also called for a city probe, and Democratic Senator Ron Wyden has urged the IRS to investigate the president. The Times’ 13,000-word investigative report found the late Fred and Mary Trump transferred more than $1 billion in wealth to their children, paying less than 5 percent of the $550 million in taxes they should have paid under inheritance tax rates. Donald Trump also helped his parents undervalue real estate holdings by hundreds of millions of dollars on IRS tax returns in order to reduce taxes.