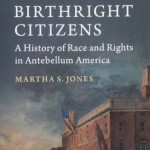 How African Americans Fought For & Won Birthright Citizenship 150 Years Before Trump Tried to End It
As President Trump claims that he can end birthright citizenship in the United States, professor Martha Jones is interviewed about the history of the 14th Amendment, which states, “All persons born or naturalized in the United States, and subject to the jurisdiction thereof, are citizens of the United States and of the State wherein they reside.” Martha Jones is the author of “Birthright Citizens: A History of Race and Rights in Antebellum America.” She is the Society of Black Alumni presidential professor and professor of history at Johns Hopkins University.

Birthright Citizenship Expert: This Is Not a Diversion, Trump Has Pushed Radical Plan for Years
President Trump claimed that he can rewrite the Constitution and end birthright citizenship in the United States in an interview released Tuesday, sparking widespread outrage. Trump told the news outlet Axios that he planned to sign an executive order ending citizenship for children of noncitizens born on U.S. soil. Civil rights groups, legal experts and politicians on both sides of the aisle are blasting Trump for his comments, including the false claim that the U.S. is the only country with birthright laws. In fact, at least 30 other countries have similar laws, including Canada, Mexico and Cuba. Martha Jones, author of “Birthright Citizens: A History of Race and Rights in Antebellum America,” talks about the history of the 14th Amendment. Martha Jones is the Society of Black Alumni presidential professor and professor of history at Johns Hopkins University.

As Bolsonaro Threatens to Criminalize Protests, a New Resistance Movement Is Emerging in Brazil
Brazil is continuing to reel from the election of far-right leader and President-elect Jair Bolsonaro, the former Army captain who won 55 percent of the vote Sunday, easily defeating Fernando Haddad of the leftist Workers’ Party. As Bolsonaro prepares to take office in January, many fear Brazil’s young democracy is now at risk. Bolsonaro, who has often praised Brazil’s former military dictatorship that ended just 33 years ago, has promised to appoint many military officers to his Cabinet. Bruno Torturra is founder and editor of Studio Fluxo, an independent media outlet based in São Paulo, and James Green, professor of Brazilian history and culture at Brown University, and talks about how the election will affect social movements, the environment and democracy across Latin America.