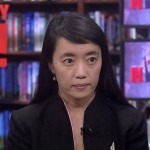 Donald Trump openly mocked Dr. Christine Blasey Ford at a rally Tuesday, casting doubt on her claims that Brett Kavanaugh had tried to rape her in high school, just days after calling her a very credible witness.

Mental Health Experts Demand Psychological Assessment of Kavanaugh for Drinking, Instability
Donald Trump openly mocked Dr. Christine Blasey Ford at a rally Tuesday, casting doubt on her claims that Brett Kavanaugh had tried to rape her in high school, just days after calling her a very credible witness. As the FBI continues its investigation into Dr. Blasey Ford’s claims, a group of mental health experts are calling for Kavanaugh to undergo a full psychological and substance abuse assessment before the Senate votes on his confirmation. Dr. Bandy Lee of the Yale School of Medicine, is the lead author of a letter titled “Mental Health Experts Urge Examination Based on Warning Signs in Kavanaugh Testimony.” The letter reads, “Judge Kavanaugh exhibited behavior that, if engaged in during his possible tenure as a Supreme Court Justice, would yield a dangerous combination of instability and power.”

Is Donald Trump Mentally Fit to Be President? Dr. Bandy Lee Questions Trump’s Capacity to Govern
As questions swirl around Brett Kavanaugh’s eligibility to join the Supreme Court, some are asking if President Donald Trump should have had the power to nominate him in the first place. Dr. Bandy Lee is a forensic psychiatrist on the faculty of Yale School of Medicine, and speaks about Trump’s mental state and the possibility of removing him from office using the 25th Amendment. Dr. Lee is an internationally recognized expert on violence. She is the editor of the best-selling book, “The Dangerous Case of Donald Trump: 27 Psychiatrists and Mental Health Experts Assess a President.”

Lift Us Up: Meet the Activists on the Front Lines of the Battle for Educational Justice in America
As Supreme Court nominee Brett Kavanaugh objects to being held accountable for his behavior in high school, we look at the criminalization of black and brown students that has led to what is known as the school-to-prison pipeline. Community activists are engaged in the fight to save schools and push for alternatives to punishment and privatization. Their voices are highlighted in a new book titled “Lift Us Up, Don’t Push Us Out! Voices from the Front Lines of the Educational Justice Movement.” In Chicago, Jitu Brown is the national director of the Journey for Justice. In Washington, D.C., Zakiya Sankara-Jabar is the co-founder of Racial Justice NOW! and field organizer for the Dignity in Schools Campaign. And in New York City, high school teacher and restorative justice coordinator E.M. Eisen-Markowitz and Mark Warren, co-author of “Lift Us Up, Don’t Push Us Out!” are interviewed.