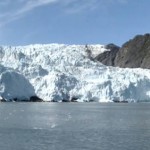 Today’s show begins with the historic announcement by the Trump administration to approve a plan to drill for oil off the Alaska coast. On Wednesday, the Department of the Interior approved Hilcorp Energy’s proposal to drill in the Beaufort Sea, six miles off the Alaskan coast.

Trump Admin Opens Up Alaska for Drilling, Threatening Already At-Risk Arctic Biodiversity
Today’s show begins with the historic announcement by the Trump administration to approve a plan to drill for oil off the Alaska coast. On Wednesday, the Department of the Interior approved Hilcorp Energy’s proposal to drill in the Beaufort Sea, six miles off the Alaskan coast. It would be the first oil and gas production facility in federal waters in Alaska. Hilcorp plans to build a nine-acre artificial island about 20 miles east of Prudhoe Bay, not far from the Arctic National Wildlife Refuge. Dubbed the Liberty Project, the operation plans to extract about 70,000 barrels of oil per day on the state’s North Slope. This latest move continues the Trump administration’s targeting of the Alaskan Arctic. Subhankar Banerjee is interviewed, who is an activist, photographer and professor of art and ecology at the University of New Mexico. He is the author of “Arctic National Wildlife Refuge: Seasons of Life and Land” and editor of “Arctic Voices: Resistance at the Tipping Point.” His work is included in the exhibition “Nature’s Nation: American Art and Environment” at the Princeton University Art Museum.

While Trump Calls Climate Change a Hoax, Hurricane Michael Damaged US Fighter Jets Worth $6 Billion
On Thursday, Vice President Mike Pence traveled to the Tyndall Air Force Base in Florida, just over a week after the base was largely destroyed during Hurricane Michael. The base is home to a fleet of 55 F-22 stealth fighters. Before Hurricane Michael leveled the base, at least 33 of these jets were flown to safety. But at least 17 of the planes, costing $339 million each, were likely left behind and possibly destroyed. There are several air bases located right on the coast in storm-prone areas in states in the South where scientists anticipate that climate change-induced hurricanes will grow more intense and more frequent. But on Thursday, Mike Pence vowed to rebuild the entire base. Pulitzer Prize-winning journalist Dave Philipps of The New York Times is interviewed.

“I Believe in the Bible. I Also Believe in Science”: How One Man Built Florida Home to Survive Storm
Fifteen miles from Tyndall Air Force Base is Mexico Beach, Florida, which was practically wiped off the map after Hurricane Michael. On the beach, just one house still stands—it is known as the Sand Palace. Over the weekend, Democracy Now! traveled to the Florida Panhandle. They spoke to Russell King, an attorney from Chattanooga, Tennessee, who owns the Sand Palace.

Saudi Ties to U.S. Universities Under Question Amid Ongoing Crisis over Khashoggi Murder
As Turkish President Recep Tayyip Erdogan urges Saudi Arabia to disclose who ordered the murder of Saudi journalist Jamal Khashoggi, the ending of today’s show looks at how U.S. universities are facing new scrutiny over their close ties to Saudi Arabia in the wake of Khashoggi’s murder. In Connecticut, activists are calling on the University of New Haven to cut ties to King Fahd Security College in Saudi Arabia. According to news reports, the Saudi forensic doctor who allegedly dismembered Khashoggi’s body served on the editorial board of a publication tied to King Fahd Security College. Dr. Salah Muhammed al-Tubaigy’s name was removed from the publication’s website this week. A forensic scientist from the University of New Haven served on the editorial board with him. Stanley Heller, executive director of the Middle East Crisis Committee, and Harvard Medical School fellow Yarden Katz are interviewed.