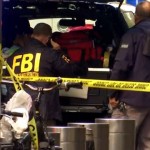 Trump Blames Media for Inciting “Anger” After Bombs Sent to CNN & High-Profile Democrats
Federal authorities have launched an investigation after pipe bombs were sent to a number of prominent Democrats, all critics of President Trump. The targets identified include President Obama, Hillary Clinton, George Soros, former Attorney General Eric Holder, Congressmember Maxine Waters and former CIA Director John Brennan. The packages listed Democratic Congressmember Debbie Wasserman Schultz as the return address. Police are also investigating a suspicious package sent to former Vice President Joe Biden and a suspicious package found today at actor Robert De Niro’s restaurant in New York. On Wednesday, CNN was forced to evacuate its New York office after it received what police described as a “live explosive device” along with a container of white powder. It came in a package addressed to Brennan. All of the targets have been vilified by President Trump in the past. Authorities said it remains unclear if the devices were operable bombs or designed to look like bombs. No one has been hurt by the devices. Former FBI agent Mike German and Chapman University professor Pete Simi, who has studied political violence for decades, are interviewed.

California Neo-Nazi Group Members Arrested for Role in Violence at Rallies in CA and Charlottesville
The leader of California neo-Nazi gang the “Rise Above Movement” was arrested Tuesday in Los Angeles. Robert Rundo faces charges of plotting riots and inciting violence for his role in a range of attacks in 2017, including the deadly Unite the Right rally in Charlottesville last August. Three other members of the group were charged alongside Rundo. Robert Boman and Tyler Laube were apprehended at their homes in Torrance and Redondo Beach. A fourth suspect, Aaron Eason, is still at large. The men are accused of participating in violent attacks, as well as using the internet to incite violence ahead of various events. The group publicly documented their attacks as a recruitment tool. Former FBI agent Mike German and Chapman University professor Pete Simi, who has studied political violence for decades, are interviewed.

Gustavo Arellano: Could Longtime GOP Stronghold Orange County Go Blue in Midterms?
Orange County, California, has become an unexpected battleground region that could determine who controls Congress after the midterms. The Southern California county between Los Angeles and San Diego has remained staunchly Republican for 80 years. Orange County produced President Richard Nixon—who was born here in Yorba Linda and retired to San Clemente—and Orange County last voted for a Democratic president in 1936 with FDR. But dissatisfaction with Donald Trump and changing demographics in the region have challenged Republican dominance in and around Orange County. Now Democrats are hoping that the midterm elections will turn Orange County blue. Gustavo Arellano is a columnist at the Los Angeles Times, and is the former editor of OC Weekly. He resigned from the publication last year in protest against budget cuts.

Renters vs. Landlords: California’s Prop 10 Would Expand Rent Control Amid Affordable Housing Crisis
On November 6, California will be voting on a ballot initiative to expand rent control. Proposition 10 would repeal the Costa-Hawkins Rental Housing Act, a sweeping state law that permanently exempts some properties from rent control. The ballot measure has come under attack by landlords and private equity firms, including the Blackstone Group. Elena Popp is interviewed. She is the executive director of the Eviction Defense Network, one of the three organizations that put Proposition 10 on the ballot.