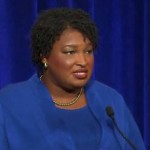 With the midterm elections less than two weeks away, we look at the governor’s race in Georgia, where Democrat Stacey Abrams is attempting to become the first black woman governor in the country.

Stacey Abrams Slams Brian Kemp on Suppressing Vote as He Worries Too Many Georgians Will Vote
With the midterm elections less than two weeks away, we look at the governor’s race in Georgia, where Democrat Stacey Abrams is attempting to become the first black woman governor in the country. Polls show Abrams and her opponent, Georgia Secretary of State Brian Kemp, are in a dead heat, but the race has been roiled with accusations that Kemp has used his power as secretary of state to suppress the vote. Earlier this month, Abrams called on Kemp to step down as secretary of state for placing 53,000 voter applications on hold. Seven out of 10 of the stalled applications are for African-American voters, in a state where less than one-third of the population is black. Voting rights activists have also sued Kemp for purging voters from the rolls. On Tuesday, Rolling Stone published an audio recording of Kemp privately telling Republican donors that he was concerned about too many Georgians exercising their right to vote. Hours later, Abrams and Kemp sparred in their first debate. Leah Wright Rigueur is a professor at the Kennedy School of Government at Harvard University. She is the author of “The Loneliness of the Black Republican: Pragmatic Politics and the Pursuit of Power.”

Greg Palast Sues Georgia’s Brian Kemp for Purging 340,000 from Voter Rolls Ahead of Election
A new investigation has found Georgia secretary of state and Republican gubernatorial candidate Brian Kemp has overseen the removal of more than 340,000 current Georgia residents from voting rolls. Greg Palast, a journalist who has been investigating Brian Kemp and voter suppression in Georgia is interviewed. He has joined a lawsuit against Kemp over the purge.

Stacey Abrams Stands By Burning the Racist, Segregationist Georgia State Flag in 1992
During Tuesday’s debate, Georgia Democratic gubernatorial candidate Stacey Abrams defended her actions in 1992 when she helped burn the Georgia state flag, which at the time contained a prominent Confederate battle flag. In a victory for civil rights advocates, the flag was later changed. Leah Wright Rigueur is a professor at the Kennedy School of Government at Harvard University.

Latino Voter Suppression in Kansas: Dodge City’s Only Polling Site Is Moved Outside City Limits
In Kansas, local officials are under fire for moving a majority-Latino city’s single polling site outside of city limits, more than a mile from the nearest bus stop. Dodge City, Kansas, is 60 percent Hispanic, but the Associated Press reports that Hispanic turnout was just 17 percent in Ford County, where Dodge City is located, compared to 61 percent turnout for white voters in 2014. The ACLU reports that the city’s lone polling site services more than 13,000 voters, compared to an average of 1,200 voters per polling site at other locations. Johnny Dunlap, chair of the Ford County Democratic Party is interviewed.