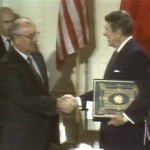 President Trump has announced plans to pull the United States out of a landmark nuclear arms pact with Russia, in a move that could spark a new arms race. President Ronald Reagan and former Soviet leader Mikhail Gorbachev signed the Intermediate-Range Nuclear Forces (INF) Treaty in 1987.

“Counterproductive and Dangerous”: Nuclear Arms Race Feared as U.S. Quits Key Treaty with Russia
President Trump has announced plans to pull the United States out of a landmark nuclear arms pact with Russia, in a move that could spark a new arms race. President Ronald Reagan and former Soviet leader Mikhail Gorbachev signed the Intermediate-Range Nuclear Forces (INF) Treaty in 1987. The INF banned all nuclear and non-nuclear missiles with short and medium ranges. The treaty helped to eliminate thousands of land-based missiles. On Saturday, Trump vowed to build new nuclear weapons. Daryl Kimball is the director of the Arms Control Association. He previously led the Coalition to Reduce Nuclear Dangers. He has been advocating for the U.S. and Russia to preserve the INF Treaty.

Trump Admin Attempts to Erase Existence of Trans People After Years of GOP-Led Attacks on Freedoms
The New York Times reports that the Trump administration is attempting to eliminate the rights of transgender people by creating a narrow legal definition of gender. Citing a government memo, the Times reveals that the Department of Health and Human Services has undertaken an effort across several government agencies to establish a legal definition of sex under Title IX, the federal civil rights law that bans discrimination on the basis of sex. That definition would be either male or female, unchangeable, and determined by the genitals a person is born with. The Times reports that the memo says, “Sex means a person’s status as male or female based on immutable biological traits identifiable by or before birth. The sex listed on a person’s birth certificate, as originally issued, shall constitute definitive proof of a person’s sex.” If enacted, the proposal would reverse the expansion of transgender rights that took place under President Barack Obama. We speak with Chase Strangio, staff attorney at the ACLU.

“Reminiscent of South Africa’s Grand Apartheid”: Israeli Human Rights Group Slams Israel at U.N
Shortly after Israel announced a new “zero tolerance” policy toward demonstrations in Gaza, some 130 Palestinians were injured Friday while protesting ongoing Israeli occupation and demanding the right of return. Four paramedics and 25 children were among the injured. Ten thousand protesters gathered along Israel’s heavily militarized separation barrier with Gaza as part of the weekly Great March of Return protests that began March 30. Since then, Israeli forces have killed at least 170 Palestinians, including more than 30 children, and injured thousands more. Hagai El-Ad, the executive director of the Israeli human rights organization B’Tselem is interviewed. He was in New York last week testifying before the U.N. Security Council officially for the first time.