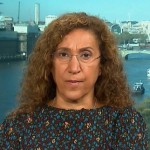 Dissident Saudi Academic Madawi Al-Rasheed on Khashoggi’s Disappearance, U.S.-Saudi Relations & More
Evidence is mounting that Saudi Crown Prince Mohammed bin Salman is directly implicated in the assassination of Saudi journalist and Washington Post columnist Jamal Khashoggi. Turkish officials say Khashoggi was tortured and murdered by a squad of 15 Saudi hit men shortly after entering the Saudi Consulate in Istanbul on October 2. Four of the men implicated in Khashoggi’s death are reportedly linked to Saudi Crown Prince Mohammed bin Salman’s security detail. After weeks of defending Saudi Arabia, President Trump said Thursday that he believes Khashoggi is dead, and acknowledged allegations against the Saudis. We speak with Madawi Al-Rasheed, a Saudi dissident and visiting professor at the Middle East Centre at the London School of Economics. She was stripped of her Saudi citizenship in 2005 for criticizing Saudi authorities. Her new piece in The New York Times is titled “Why King Salman Must Replace M.B.S.”

Dr. Madawi Al-Rasheed: In Khashoggi Murder, Saudi Arabia Must Not Be Allowed to Investigate Itself
As details continue to emerge about the disappearance and probable murder of Washington Post columnist Jamal Khashoggi, Saudi dissident Madawi Al-Rasheed is interviewed about Khashoggi’s history as a Saudi journalist and government insider, and the future of Saudi Arabia. She is a visiting professor at the London School of Economics Middle East Centre. She was stripped of her Saudi citizenship in 2005 for criticizing Saudi authorities. Her new piece in The New York Times is titled “Why King Salman Must Replace M.B.S.”

Netanyahu Attacks Israeli Human Rights Group B’Tselem for Criticizing Israeli Occupation at U.N.
Fears are growing as Israel escalates its military presence along its heavily militarized separation barrier with Gaza. Israel has deployed 60 tanks to meet Palestinian protesters gathering today to protest the ongoing Israeli occupation and demand the right of return for those displaced from their homes. Israel has announced it is implementing a “zero tolerance” policy toward protesters in Gaza, who have been staging weekly Friday protests since March 30 under the banner of the Great March of Return. Since then, Israeli forces have killed at least 170 Palestinians, including more than 30 children, and injured at least 18,000. Hagai El-Ad is executive director of the human rights group B’Tselem, who testified Thursday in front of the United Nations Security Council about the crisis in Gaza and the West Bank.