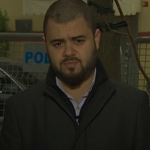 New details have emerged in the disappearance and probable death of Washington Post journalist Jamal Khashoggi, who was reportedly still alive when his body was dismembered inside the Saudi Consulate in Istanbul more than two weeks ago.

Jamal Elshayyal: Response to Khashoggi’s Death Will Determine Future of Saudi Arabia & Middle East
New details have emerged in the disappearance and probable death of Washington Post journalist Jamal Khashoggi, who was reportedly still alive when his body was dismembered inside the Saudi Consulate in Istanbul more than two weeks ago. A Turkish source says it took Khashoggi seven minutes to die. The New York Times reports four of the 15 Saudi men implicated in the killing are directly linked to Crown Prince Mohammed bin Salman’s security detail. We speak with Jamal Elshayyal, an international award-winning senior correspondent for Al Jazeera. He wrote a piece for the Middle East Eye last year titled “The rise of Mohammed bin Salman: Alarm bells should be ringing.”

A History of Crushing Dissent: Before Khashoggi, Saudis Targeted Feminists Demanding Right to Drive
As international outcry grows louder amid new revelations about the shocking death of Saudi journalist and Washington Post columnist Jamal Khashoggi, investigative journalist Sarah Aziza is interviewed about Saudi Arabia’s long history of targeting dissidents. Just weeks before the ban was lifted on women driving in Saudi Arabia, the Saudi government arrested several of the country’s most prominent feminist activists, including women who had been campaigning for decades for the right to drive. Sarah Aziza has been reporting from Saudi Arabia with the Pulitzer Center for Crisis Reporting. Her latest piece for The Intercept is headlined “Jamal Khashoggi Wasn’t the First—Saudi Arabia Has Been Going After Dissidents Abroad for Decades.”

Investigation: As U.S.-Backed War in Yemen Raged, UAE Hired U.S. Mercenaries to Kill Yemeni Leaders
A shocking new investigation has revealed that the United Arab Emirates hired U.S. mercenaries to carry out assassinations of political and clerical leaders in Yemen. The former elite U.S. special operations fighters were paid to take part in missions to kill those deemed to be “terrorists” by the UAE. The UAE worked with the U.S. company Spear Operations Group, founded by an Israeli-American man named Abraham Golan, who told BuzzFeed, “There was a targeted assassination program in Yemen. I was running it.” The group’s first target in Yemen was a local leader of al-Islah, a political party whose members include Nobel Peace Prize Laureate Tawakkul Karman. Journalist Aram Roston of BuzzFeed News, who broke the story, is interviewed. His new piece is titled “A Middle East Monarchy Hired American Ex-Soldiers to Kill Its Political Enemies. This Could Be the Future of War.”