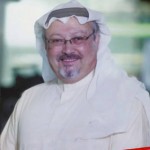 Saudi Arabia will allow Turkey to search its consulate in Istanbul Monday afternoon, nearly two weeks after prominent journalist and Washington Post columnist Jamal Khashoggi disappeared after entering the consulate on October 2. He has not been seen since.

Former Saudi Political Prisoner: Khashoggi’s Disappearance Is Sending a Gruesome Message to Critics
Saudi Arabia will allow Turkey to search its consulate in Istanbul Monday afternoon, nearly two weeks after prominent journalist and Washington Post columnist Jamal Khashoggi disappeared after entering the consulate on October 2. He has not been seen since. This news comes amid mounting international outcry that Saudi Arabia explain Khashoggi’s shocking disappearance, after Turkish officials accused the Saudis of assassinating Khashoggi, dismembering him and smuggling body parts out of the consulate. In an interview with CBS’s “60 Minutes,” President Trump said Saudi Arabia would suffer “severe consequences” if it was found responsible. But Trump has repeatedly said he opposes ending U.S. weapons sales to the kingdom, which he claims are worth $110 billion to U.S. companies. The Saudi Foreign Ministry has responded to Trump’s threats, saying if it “receives any action, it will respond with greater action.” The Saudis deny Khashoggi was killed in their consulate. Ali al-Ahmed, who’s is a Saudi dissident and founder and director of the Institute for Gulf Affairs is interviewed. He was a political prisoner in Saudi Arabia when he was 14 years old—the youngest political prisoner at that time.

Trump Admin Hints It May Resume Family Separation at Border; ACLU Says “Public Outcry Is Critical”
The Trump administration is reportedly considering plans to resume its policy of forcibly separating migrant children from their families along the U.S.-Mexico border, even as the full number of people torn apart the last time it carried out the widely condemned practice remains unclear. A new report by Amnesty International suggests immigration officials separated some 6,000 families between April and August, a far higher number of children and parents torn apart than previously thought. Trump administration officials are now considering plans to detain asylum-seeking families together for up to 20 days and then force parents to choose either to stay detained together for months or years while their immigration case proceeds or to allow their children to be taken to a government shelter where their relatives or others can seek custody. Lee Gelernt, deputy director of the ACLU Immigrants’ Rights Project is interviewed. He is the lead lawyer on the ACLU’s national challenge to the Trump administration’s family separation practice.

Vatican Canonizes Salvadoran Archbishop Óscar Romero, Who Was Killed by a U.S.-Backed Death Squad
Pope Francis has named Salvadoran Archbishop Óscar Romero a saint. Romero was a champion for the poor and oppressed who was murdered by a U.S.-backed right-wing death squad in 1980 at the beginning of the brutal U.S.-backed military campaign in El Salvador. Wearing the blood-stained rope belt that Romero wore when he was assassinated, Pope Francis praised Romero for disregarding his own life “to be close to the poor and to his people.” Matt Eisenbrandt, a human rights lawyer and the author of “Assassination of a Saint: The Plot to Murder Óscar Romero and the Quest to Bring His Killers to Justice” is interviewed. Eisenbrandt served on the trial team that brought the only court verdict ever reached for Romero’s murder.