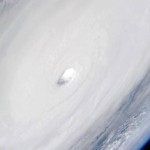 At least two people have died since Hurricane Michael made landfall in Florida and Georgia on Wednesday. It is the third most powerful storm to ever hit the U.S. mainland, and meteorologists say it is supercharged by warmer-than-usual water in the Gulf of Mexico.

Hurricane Michael Pummels Communities in Florida, a State Led by a Climate Change-Denying Governor
At least two people have died since Hurricane Michael made landfall in Florida and Georgia on Wednesday. It is the third most powerful storm to ever hit the U.S. mainland, and meteorologists say it is supercharged by warmer-than-usual water in the Gulf of Mexico. But Florida Governor Rick Scott has a long history of denying climate change. In 2011, his administration reportedly banned state employees in Florida’s Department of Environmental Protection from using the terms “climate change,” “global warming” and “sea level rise.” Gloria Horning is interviewed and is a social and environmental justice advocate. She serves on the Environmental Advisory Board for Pensacola, Florida.

Owner of Limo Involved in Deadly NY Crash Spent Years as FBI Informant Entrapping Muslim Men
When a limousine crashed in upstate New York this weekend, killing 20 people, investigators quickly uncovered a series of shoddy practices by the limo company that owned the vehicle, including a record of repeated safety violations. The limousine that crashed in Schoharie, New York, in the deadliest U.S. transportation disaster since 2009 had failed an inspection last month and was not licensed to be on the road. Now it’s been revealed that the owner of Prestige Limousine Chauffeur Service is a Pakistani immigrant named Shahed Hussain, an FBI informant with a long history of entrapping Muslim men on behalf of the U.S. government. On Wednesday, state officials arrested his son Nauman Hussain, who operates his father’s limo service, and charged him with criminally negligent homicide. In Pittsburgh, a man is interviewed who was entrapped by Hussain, Khalifah al-Akili. Lyric Cabral, who is co-director of “(T)ERROR,” a documentary that follows a sting operation targeting Khalifah al-Akili is also interviewed. In New York, Sam Braverman is an attorney who represented one of the “Newburgh Four,” four black Muslim men who were convicted in 2010 of plotting to shoot down U.S. military planes based on testimony from Shahed Hussain.

“How Fascism Works”: Jason Stanley on Trump, Bolsonaro and the Rise of Fascism Across the Globe
In his new book “How Fascism Works: The Politics of Us and Them,” Yale professor Jason Stanley warns about the dangers of normalizing fascist politics, writing, “What normalization does is transform the morally extraordinary into the ordinary. It makes us able to tolerate what was once intolerable by making it seem as if this is the way things have always been.” Jason Stanley is interviewed in New York.