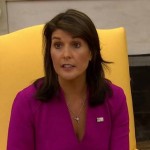 U.S. Ambassador to the United Nations Nikki Haley has announced she is resigning her post at the end of the year. The former South Carolina governor—one of the few women in Trump’s Cabinet—gave no reason for her departure.

Rashid Khalidi: From Iran to Palestine, Nikki Haley Put a Nice Face on Trump’s “Horrific” U.S. Policies
U.S. Ambassador to the United Nations Nikki Haley has announced she is resigning her post at the end of the year. The former South Carolina governor—one of the few women in Trump’s Cabinet—gave no reason for her departure. During Nikki Haley’s time as U.S. ambassador to the United Nations, the United States withdrew from the Paris climate accord; the U.N. Human Rights Council; the Iran nuclear deal; UNRWA, the U.N. agency that provides humanitarian aid to Palestinians; and UNESCO, the U.N. educational and cultural agency. Rashid Khalidi is an Edward Said professor of Arab studies at Columbia University, and speaks about the significance of Haley’s departure and the role of the United States at the United Nations. Khalidi is the author of “Brokers of Deceit: How the U.S. Has Undermined Peace in the Middle East.” His next book, titled “The Hundred Years’ War on Palestine,” will be out in May.

Rashid Khalidi on the U.S. Backing of Brutal Saudi Regime & the Disappearance of Jamal Khashoggi
It’s been more than a week since Saudi journalist Jamal Khashoggi disappeared after entering the Saudi Consulate in Istanbul last Tuesday, sparking international concern. Now, a Turkish official has told The New York Times that Khashoggi was assassinated inside the consulate by a team of 15 Saudi operatives who used a bone saw to dismember his body before smuggling body parts out of the building. Rashid Khalidi who is an Edward Said professor of Arab studies at Columbia University is interviewed. He is the author of several books, including “Brokers of Deceit: How the U.S. Has Undermined Peace in the Middle East.”

Valve Turners on Trial: Judge Acquits Three Climate Activists Who Shut Down Tar Sands Pipelines
A month before the 2016 election, anti-pipeline activists staged an unprecedented coordinated action to shut down the flow of oil from Canada to the United States. On October 11, 2016, activists in North Dakota, Washington, Montana and Minnesota turned the manual safety valves on four pipelines, temporarily halting the flow of nearly 70 percent of the crude oil imported to the United States from Canada. They came to be known as the “valve turners.” What followed was a lengthy legal battle that ended with some of the activists in jail. But on Tuesday, three valve turners who broke into an oil pipeline facility in Minnesota on that day in 2016 were acquitted. The valve turners themselves, Annette Klapstein and Emily Johnston, speak about their acquittal. Johnston is a poet and co-founder of 350Seattle.org, and Klapstein is a retired attorney for the Puyallup Tribe and member of the Raging Grannies. Their attorney, Kelsey Skaggs, is also interviewed.

Ex-NASA Scientist Dr. James Hansen: We Need to Act Now to Preserve Our Planet for Future Generations
As Hurricane Michael barreled down on Florida, famed climate scientist Dr. James Hansen traveled to Minnesota earlier this week to testify on the imminent danger of climate change. He was supposed to be an expert witness at the trial for the “valve turners,” the anti-pipeline activists who staged an unprecedented coordinated action to shut down the flow of oil from the United States to Canada in 2016. But the judge ruled she would not allow witnesses like Dr. Hansen to testify on the clear and present danger posed by climate change. On Tuesday, valve turner activists Annette Klapstein and Emily Johnston were acquitted. Hansen in Minneapolis speaks about the valve turners, the recent IPCC report about the imminent threat of climate change and what must be done to save the planet from destruction. Hansen is the former top climate scientist at NASA. He is now the director of Climate Science, Awareness and Solutions at Columbia University’s Earth Institute.