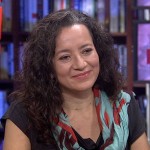 Republican Senator Jeff Flake of Arizona was on his way to cast his vote, shortly after announcing his intentions to confirm Trump’s Supreme Court nominee Brett Kavanaugh, when he was confronted in an elevator by two women who are sexual assault survivors.

Meet One of the Sex Assault Survivors Who Confronted Jeff Flake & Triggered FBI Probe of Kavanaugh
Republican Senator Jeff Flake of Arizona was on his way to cast his vote, shortly after announcing his intentions to confirm Trump’s Supreme Court nominee Brett Kavanaugh, when he was confronted in an elevator by two women who are sexual assault survivors. The women held open the elevator door, telling Flake, through their tears, that he was dismissing their pain. Soon after, Flake surprised his colleagues on the Senate Judiciary Committee by advancing Kavanaugh’s nomination but asking for an FBI investigation before the full Senate vote. President Trump has now ordered an FBI investigation into Kavanaugh. Ana María Archila is one of the women credited with helping to delay Kavanaugh’s confirmation.

Ex-Senate Aide: Judge Brett Kavanaugh Has Lied Every Time He Has Testified Under Oath
The FBI is investigating Supreme Court nominee Brett Kavanaugh after Dr. Christine Blasey Ford testified last week that he attempted to rape her in 1982. But Democrats say the FBI’s probe is too limited, and critics claim that Kavanaugh has repeatedly committed perjury by lying during his testimony about his drinking habits, the content of his yearbook and a spate of other topics. Lisa Graves is the co-director of Documented, which investigates corporate influence on democracy. She is the former chief counsel for nominations for the ranking member of the Senate Judiciary Committee and was deputy assistant attorney general in the Department of Justice. Her recent article for Slate is titled “I Wrote Some of the Stolen Memos That Brett Kavanaugh Lied to the Senate About.”

Kimberlé Crenshaw: How Society Embraces Male Denials, from Clarence Thomas to Brett Kavanaugh
When President Trump’s Supreme Court nominee Brett Kavanaugh testified last week before the Senate Judiciary Committee, he called Dr. Christine Blasey Ford’s accusations against him and the subsequent fallout a “circus” orchestrated by the Democrats. His language echoed Clarence Thomas, who nearly 30 years ago said of the Anita Hill trials, “This is a circus. It’s a national disgrace. … It is a high-tech lynching for uppity blacks who in any way deign to think for themselves.” Kimberlé Crenshaw is a professor of law at UCLA and Columbia University who assisted Anita Hill’s legal team. She is the founder of the African American Policy Forum. Her piece for The New York Times last week was headlined “We Still Haven’t Learned from Anita Hill’s Testimony.”