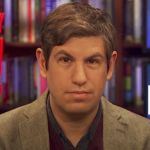 Voting rights activists are hailing a new House bill that aims to restore voting rights to millions, crack down on the influence of dark money in politics, restore the landmark Voting Rights Act, establish automatic and same-day voter registration and other measures. The bill has been dubbed the For the People Act.

Ari Berman: Dems Introduce Sweeping Voting Rights Bill to Combat Rampant Voter Suppression
Voting rights activists are hailing a new House bill that aims to restore voting rights to millions, crack down on the influence of dark money in politics, restore the landmark Voting Rights Act, establish automatic and same-day voter registration and other measures. The bill has been dubbed the For the People Act. It is the first piece of legislation introduced by the new Democratic majority in the House. Ari Berman is a senior writer at Mother Jones, reporting fellow at The Nation Institute and author of “Give Us the Ballot: The Modern Struggle for Voting Rights in America.” His latest piece is titled “Democrats’ First Order of Business: Making It Easier to Vote and Harder to Buy Elections.”

Sunrise Movement: Pelosi’s Actions on Climate Fall Woefully & Inexcusably Short of What We Need
House Speaker Nancy Pelosi is facing criticism from some climate activists for failing to back a Green New Deal. Last week Pelosi announced the formation of a new Select Committee on the Climate Crisis, headed by long-standing Florida Congressmember Kathy Castor. But the committee is far weaker than what backers of a Green New Deal had envisioned. The committee will not have subpoena power or the power to draft legislation. Varshini Prakash is the founder of the Sunrise Movement, a youth-led climate group that has occupied and lobbied at congressional offices, risking arrest to demand adoption of the Green New Deal and bold climate leadership.

Surviving R. Kelly: New Doc Says Time’s Up for Singer Accused of Abusing Black Girls for Decades
Democracy Now! takes a look at the shocking Lifetime documentary series “Surviving R. Kelly,” which chronicles two decades of allegations of sexual assault and misconduct against the celebrated R&B singer and producer. R. Kelly has been accused of abuse, predatory behavior and pedophilia throughout his career but has avoided criminal conviction despite damning evidence and multiple witnesses. Angelo Clary, whose daughter Azriel Clary met R. Kelly at the age of 17 and moved in with him with hopes of advancing her music career, hasn’t seen her in almost four years. Oronike Odeleye is the co-founder of #MuteRKelly—a campaign to end R. Kelly’s music career—and an Atlanta-based arts administrator.