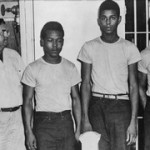 Florida Governor Ron DeSantis has granted posthumous pardons to four young African-American men accused of raping a white woman near Groveland, Florida, in 1949. Two men were brutally murdered as a result of the false accusations.

The Groveland Four: Florida Pardons Men Falsely Accused in Jim Crow-Era Rape Case in 1949
Florida Governor Ron DeSantis has granted posthumous pardons to four young African-American men accused of raping a white woman near Groveland, Florida, in 1949. Two men were brutally murdered as a result of the false accusations. The case is now seen as a racially charged miscarriage of justice emblematic of the Jim Crow South. The story of the “Groveland Four,” now 70 years old, has continued to haunt the state of Florida. Democracy Now! speaks with Gilbert King, Pulitzer Prize-winning author of “Devil in the Grove: Thurgood Marshall, the Groveland Boys, and the Dawn of a New America,” and Carol Greenlee, daughter of Charles Greenlee, one of the Groveland Four.

As Gov’t Shutdown Drags On, IRS Continues to Aid the Rich & Corporations While Targeting the Poor
As 800,000 federal workers remain furloughed or working without pay in the longest government shutdown in U.S. history, we look at how the Trump administration has restarted a division of the Internal Revenue Service to help corporate lenders. The Washington Post reports that an appeal from the mortgage industry has resulted in hundreds of IRS staffers returning to the agency to carry out income verifications for lenders. This process earns the $1.3 trillion mortgage banking industry millions of dollars in fees. Paul Kiel is a reporter for ProPublica and contributor to the series “Gutting the IRS.” His recent piece for the series is titled “Who’s More Likely to Be Audited: A Person Making $20,000—or $400,000?”