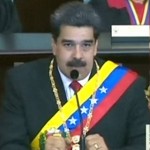 Venezuela remains in a state of crisis as opposition forces—with the backing of the United States—attempt to unseat the government of Nicolás Maduro. On Thursday, Venezuelan Defense Minister Vladimir Padrino López said the military continues to stand by Maduro. His remarks came one day after President Trump announced that the U.S. would recognize opposition leader Juan Guaidó as Venezuela’s new leader.

How Washington’s Devastating “Economic Blockade” of Venezuela Helped Pave the Way for Coup Attempt
Venezuela remains in a state of crisis as opposition forces—with the backing of the United States—attempt to unseat the government of Nicolás Maduro. On Thursday, Venezuelan Defense Minister Vladimir Padrino López said the military continues to stand by Maduro. His remarks came one day after President Trump announced that the U.S. would recognize opposition leader Juan Guaidó as Venezuela’s new leader. Guaidó, the new head of Venezuela’s National Assembly, declared himself president on Wednesday during a large opposition protest. Meanwhile, Venezuelan President Nicolás Maduro has ordered the U.S. to remove all of its diplomats from Venezuela, but Washington is ignoring the request, claiming Maduro no longer has authority to take such action. Two long-term observers of Venezuelan politics: Venezuelan-born NYU professor Alejandro Velasco and Steve Ellner are interviewed. Steve Ellner lives in Venezuela, where he taught for several decades.

Venezuelan Foreign Minister: The U.S. Interferes in Latin American Politics Every Day, Every Hour
The U.S.-led effort targeting the oil-rich nation of Venezuela dates back two decades, since the late Hugo Chávez became president in 1999. In November, John Bolton accused Venezuela, Cuba and Nicaragua of being part of a “troika of tyranny.” In September, The New York Times reported the Trump administration conducted secret meetings with rebellious military officers in Venezuela to discuss overthrowing Maduro. Democracy Now! airs more of their recent interview with Venezuelan Foreign Minister Jorge Arreaza. He came into the Democracy Now! studio last week.

Historian: Venezuela Is “Staging Ground” for U.S. to Reassert Control Over Latin America
While Mexico and Uruguay are calling for dialogue to address the crisis in Venezuela, much of Latin America has sided with the Trump administration by recognizing Venezuelan opposition leader Juan Guaidó as Venezuela’s new leader. Democracy Now! looks at what this means for the broader region with professors Alejandro Velasco and Steve Ellner.

CodePink’s Medea Benjamin Disrupts Pompeo Speech to Denounce U.S. Regime Change Agenda in Venezuela
On Thursday, U.S. Secretary of State Mike Pompeo pledged to send $20 million to the Venezuelan opposition in the form of humanitarian aid to address the shortages of food and medicine caused in part by harsh U.S. sanctions. Pompeo made the announcement while speaking at the OAS, the Organization of American States. Pompeo’s speech was interrupted by CodePink co-founder Medea Benjamin, who held a sign reading, ”OAS: Don’t Support a Coup in Venezuela.”