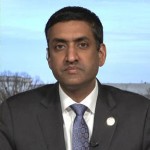 In Syria, a suicide bomber struck a restaurant in the northern city of Manbij Wednesday, killing 19 people including four Americans. Two of them were U.S. soldiers.

Rep. Ro Khanna: U.S. Troops Are a “Sitting Target” in Syria; It’s Time to Bring Them Home
In Syria, a suicide bomber struck a restaurant in the northern city of Manbij Wednesday, killing 19 people including four Americans. Two of them were U.S. soldiers. The bombing was claimed by ISIS and came just weeks after President Trump declared victory over the group and ordered U.S. troops to withdraw from Syria, prompting the resignation of Pentagon chief Jim Mattis. Just hours after the attack, Vice President Mike Pence reiterated that ISIS has been defeated. Wednesday’s attack drew renewed calls from congressional hawks—both Republicans and Democrats—to reverse Trump’s Syria withdrawal. The U.S. has an estimated 2,000 troops stationed in Syria, even though Congress has never declared war on the country. Ro Khanna is a Democratic congressmember from California. He is a leading critic of U.S. military interventions abroad.

A Coup in Progress? Venezuelan Foreign Minister Decries U.S. & Brazil-Backed Effort to Oust Maduro
The United States and allied nations in Latin America are ratcheting up pressure on Venezuela in what appears to be a coordinated effort to remove Venezuelan President Nicolás Maduro from office. Maduro was sworn in last week to a second 6-year term following his victory in last May’s election, which was boycotted by the opposition. Days before Maduro was sworn in, opposition figure Juan Guaidó became head of the National Assembly, which soon voted to declare Maduro a “usurper” in an effort to remove him from office. The United States, Brazil and other nations have welcomed the effort. As the political crisis intensifies, Maduro has reached out to the United Nations to help establish a peace dialogue in Venezuela. Jorge Arreaza is the Venezuelan foreign minister. He met with U.N. Secretary-General António Guterres this week.