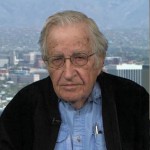 A Disaster for Brazil: Noam Chomsky on Brazil’s New Far-Right President Jair Bolsonaro
As Brazil’s President-elect Jair Bolsonaro prepares to take office on Tuesday, Democracy Now! returns to their conversation with world-renowned political dissident, linguist and author Noam Chomsky shortly after the election. Bolsonaro’s impending presidency marks the most radical political shift Brazil since military rule ended more than 30 years ago. Bolsonaro is a former Army officer who has praised Brazil’s former military dictatorship, spoken in favor of torture and threatened to destroy, imprison or banish his political opponents. Bolsonaro has also encouraged the police to kill suspected drug dealers, and once told a female lawmaker she was too ugly to rape. Noam Chomsky calls Bolsonaro a “disaster for Brazil.”

Noam Chomsky: Members of Migrant Caravan Are Fleeing from Misery & Horrors Created by the U.S.
Days after a federal judge in California temporarily halted Trump’s asylum ban, Democracy Now! revisits their conversation with world-renowned professor, linguist and dissident Noam Chomsky about U.S. foreign policy in Central America. He joins the discussion from Tucson, Arizona, where he teaches at the University of Arizona. Chomsky is also institute professor emeritus at the Massachusetts Institute of Technology, where he has taught for 50 years. Democracy Now! asks him about the Central American caravan and national security adviser John Bolton declaring Venezuela, Cuba and Nicaragua to be part of a “troika of tyranny” and a “triangle of terror” earlier this month.

A March to Disaster: Noam Chomsky Condemns Trump for Pulling Out of Landmark Nuclear Arms Treaty
President Donald Trump recently announced plans to pull the United States out of a landmark nuclear arms pact with Russia, in a move that could spark a new arms race. President Ronald Reagan and former Soviet leader Mikhail Gorbachev signed the Intermediate-Range Nuclear Forces Treaty, or INF, in 1987. The INF banned all nuclear and non-nuclear missiles with short and medium ranges. The treaty helped to eliminate thousands of land-based missiles. Democracy Now! spoke with world-renowned political dissident, linguist and author Noam Chomsky in October about the significance of the INF treaty and the impact of Trump’s plan to pull out.

Noam Chomsky: The Future of Organized Human Life Is At Risk Thanks to GOP’s Climate Change Denial
As the death toll from the climate change-fueled Camp Fire in California continues to rise and hundreds remain missing, Democracy Now! rebroadcasts their conversation about climate change with world-renowned political dissident, linguist and author Noam Chomsky from October. He says Republican Party leaders are dedicated to “enriching themselves and their friends” at the cost of the planet, and warns: “We have to make decisions now which will literally determine whether organized human life can survive in any decent form.”

Noam Chomsky on Pittsburgh Attack: Revival of Hate Is Encouraged by Trump’s Rhetoric
On October 27th, a gunman stormed the Tree of Life synagogue in Pittsburgh, killing 11 Jewish worshipers. The massacre has been described as the worst anti-Semitic attack in U.S. history. After the shooting, Democracy Now! spoke with Noam Chomsky, the world-renowned professor, linguist and dissident, about Pittsburgh, Israel’s policies toward Gaza and other recent white supremacist and right-wing attacks in the U.S.