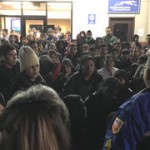 U.S. Customs and Border Protection have ordered medical checks on every child in its custody, following the death of two Guatemalan children in recent weeks. On Christmas Eve, an 8-year-old Guatemalan boy named Felipe Gómez Alonzo died in New Mexico while in CBP custody.

Without Notifying Anyone, ICE Dumps Hundreds of Migrants at El Paso Bus Station Around Christmas
U.S. Customs and Border Protection have ordered medical checks on every child in its custody, following the death of two Guatemalan children in recent weeks. On Christmas Eve, an 8-year-old Guatemalan boy named Felipe Gómez Alonzo died in New Mexico while in CBP custody. This follows the death of a 7-year-old indigenous Guatemalan girl, Jakelin Caal Maquín, who died on December 8—also in New Mexico—two days after she and her father presented themselves at the border in a bid for asylum. Meanwhile, authorities in El Paso, Texas, scrambled over the Christmas holiday to assist hundreds of migrant asylum seekers who were dropped off suddenly by ICE officials outside a Greyhound bus terminal without any plan to house them. Dylan Corbett is interviewed, who is the executive director of Hope Border Institute, an El Paso-based charity that assists migrants.

“RBG”: As Justice Ruth Bader Ginsburg Recovers from Surgery, a Remarkable Film Charts Her Trajectory
Supreme Court Justice Ruth Bader Ginsburg has been discharged from the hospital following surgery that removed two malignant growths in her left lung. Doctors called the surgery a success and said there’s no sign that Ginsburg’s cancer has spread. The health of the liberal 85-year-old justice—the oldest sitting justice on the Supreme Court bench—has come under increased scrutiny in recent years. In November, she was hospitalized after a fall that resulted in three fractured ribs. She previously fractured two ribs in 2012 and has twice survived cancer—pancreatic cancer in 2009 and colon cancer in 1999. Despite her illnesses, in her 25 years on the court Ginsburg has never missed a day of oral argument. A remarkable award-winning documentary released earlier this year at the Sundance Film Festival has been shortlisted for an Academy Award for Best Documentary. It’s called ”RBG.”