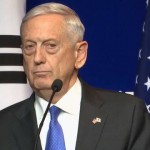 Secretary of Defense James Mattis has announced he will resign at the end of February, in a letter publicly rebuking President Trump’s foreign policy. Mattis resigned one day after President Trump ordered the withdrawal of all 2,000 U.S. troops from Syria and on the same day that reports emerged that Trump has ordered the withdrawal of about 7,000 troops from Afghanistan.

Andrew Bacevich on Mattis & Why We Need to End Our Self-Destructive, Mindless Wars in Middle East
Secretary of Defense James Mattis has announced he will resign at the end of February, in a letter publicly rebuking President Trump’s foreign policy. Mattis resigned one day after President Trump ordered the withdrawal of all 2,000 U.S. troops from Syria and on the same day that reports emerged that Trump has ordered the withdrawal of about 7,000 troops from Afghanistan. The New York Times reports Mattis is the first prominent Cabinet member to resign in protest over a national security issue in almost 40 years. Much of the Washington establishment expressed shock over Mattis’s resignation. Andrew Bacevich, a retired colonel and Vietnam War veteran, is interviewed. He’s the author of several books, including his latest, “Twilight of the American Century.” His other books include “America’s War for the Greater Middle East: A Military History” and “Washington Rules: America’s Path to Permanent War.” He is professor emeritus of international relations and history at Boston University.

Congress Touts First Step Act as Criminal Justice Victory—But Critics Say Bill Makes False Promises
A major criminal justice reform bill is poised to become law after the U.S. House of Representatives overwhelmingly voted in its favor Thursday. The First Step Act, passed in the Senate earlier this week with an 87-12 vote, would roll back sentences for federal prisoners, including mandatory life terms for third-time offenders and mandatory sentences for nonviolent drug users. The bill is now heading to the desk of President Trump, who has pledged to sign it into law. The bill only affects federal prisoners, who make up less than 10 percent of the more than 2 million U.S. prisoners. It has been endorsed by a wide range of supporters across the political spectrum, from the American Civil Liberties Union to the conservative Koch brothers. But the bill explicitly excludes immigrants and has been criticized by groups such as the Movement for Black Lives, a coalition of more than 150 black-led organizations, for encouraging profiteering and making “false promises” about bringing black prisoners home. Van Jones is president and co-founder of #cut50, a national bipartisan initiative to reduce the U.S.’s incarcerated population by 50 percent over the next 10 years. Jessica Jackson Sloan, a human rights attorney and co-founder and national director of #cut50 is also interviewed.

This Congressmember Camped in the Cold to Escort an Asylum-Seeking Honduran Mother Across Border
Nearly a month after a photo of a Honduran mother and her small children fleeing tear gas fired by U.S. Border Patrol captivated the nation, 39-year-old Maria Meza was finally admitted into the U.S. with her five children on Monday. Their asylum request is now being processed. But this came only after California Congressmembers Jimmy Gomez and Nanette Barragán intervened on behalf of Meza’s family, camping out overnight with them on the U.S. side of the border near the Otay Mesa Port of Entry between Tijuana and San Diego. Congressmember Nanette Barragán is interviewed, who just returned from the U.S.-Mexico border.