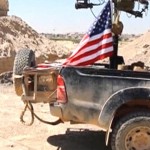 President Trump has ordered the withdrawal of all 2,000 U.S. troops in Syria, shocking many in Washington and around the world. On Wednesday, Trump tweeted, “We have defeated ISIS in Syria, my only reason for being there during the Trump Presidency.”

Trump Pledges to Withdraw U.S. Ground Troops from Syria—But Global Powers & Deadly Air Forces Remain
President Trump has ordered the withdrawal of all 2,000 U.S. troops in Syria, shocking many in Washington and around the world. On Wednesday, Trump tweeted, “We have defeated ISIS in Syria, my only reason for being there during the Trump Presidency.” He ordered the withdrawal despite opposition from within the White House. Yazan al-Saadi is interviewed, a Syrian-Canadian writer and researcher, who warns that U.S. military presence in the region will continue. “You might have a large chunk of the boots on the ground leaving, but it seems very clear that the American air power is going to remain,” al-Saadi says.

The Bombings Will Continue: Phyllis Bennis Warns U.S. Military Role in Syria Is Not Actually Ending
Facebook is under fire again, this time for new revelations that Russian trolls targeted African Americans on social media in an effort to influence the vote ahead of the 2016 election. A pair of bipartisan reports published by the Senate Intelligence Committee Monday claim the Russian government focused on African Americans in its effort to suppress the turnout of voters likely to cast ballots for Hillary Clinton, spreading fake news and sowing discord in the run-up to the election. The NAACP has launched a Facebook boycott in response, demanding the social media giant be held responsible. Derrick Johnson is president and CEO of the NAACP.

NAACP Launches Boycott of Facebook: Platform Is Unhealthy for African Americans & U.S. Democracy
President Trump has announced that the U.S. will withdraw troops from Syria, in a move that has been praised by some in the American peace movement and some progressive lawmakers, as well as anti-interventionist Republicans, including Senators Rand Paul and Mike Lee. Phyllis Bennis is a fellow at the Institute for Policy Studies, and warns that the U.S. warplanes and drones will continue to bomb the country. ”ISIS has not been ‘defeated,’ and the U.S. should not remain in Syria militarily,” Bennis says. “You cannot defeat terrorism militarily. Terrorism is a phenomenon that emerges out of social and economic and national and all kinds of crises, in all kinds of countries. And stopping it doesn’t mean playing whack-a-mole with your military.”