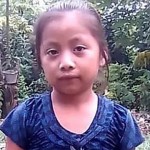 Outrage is mounting over the death of a 7-year-old indigenous Guatemalan girl in Border Patrol custody, as lawmakers demand answers for the conditions that led Jakelin Caal Maquín to die after being detained at the U.S.-Mexico border.

Justice for Jakelin: Lawmakers Demand Answers in Death of 7-Year-Old Girl in Border Patrol Custody
Outrage is mounting over the death of a 7-year-old indigenous Guatemalan girl in Border Patrol custody, as lawmakers demand answers for the conditions that led Jakelin Caal Maquín to die after being detained at the U.S.-Mexico border. Maquin died on December 8, two days after she and her father presented themselves at the border alongside 161 other Central American asylum seekers. She had been held in detention for more than eight hours when she began to have seizures. Border Patrol agents brought the girl to the hospital after her body temperature spiked to 105.7 degrees. The 7-year-old died of dehydration, shock and liver failure at an El Paso hospital less than 24 hours later. Clara Long is a senior researcher at Human Rights Watch.

Greg Grandin: How U.S. Policies Punished Central Americans, Long Before Jakelin Caal Maquín’s Death
As public outrage grows over the death of Jakelin Caal Maquín, a 7-year-old indigenous Guatemalan girl who died in Border Patrol custody, DN discusses U.S. policy in Central America with Greg Grandin, prize-winning author and professor of Latin American history at New York University. Searching for answers after Jakelin’s death, Grandin points to border militarization policies dating back to the Clinton administration and the closure of safer urban routes to the U.S. border. He also links the displacement of Jakelin’s family to the U.S.-backed coup in Guatemala in 1954 and economic policies that destroyed subsistence agriculture in her region. Grandin’s latest piece in The Nation, co-authored with Elizabeth Oglesby, is titled “Who Killed Jakelin Caal Maquín at the US Border?”

Mental Health Experts & Rights Groups Call for Unceasing Media Coverage of Detained Migrant Children
It’s been more than four months since a judge ordered the Trump administration to reunite all families that were separated at the U.S.-Mexico border, but 140 children are still separated from their parents in U.S. custody. It is believed that 30 children will never be reunited. Despite this, family separation is no longer in the daily headlines. We speak with a Harvard psychologist who is trying to change this by calling on U.S. media outlets to highlight the growing number of days that migrant children have been forcibly separated from their parents. Dr. Paula J. Caplan is a clinical and research psychologist and associate at the DuBois Institute at Harvard University. She is leading a coalition of human rights groups and mental health professionals calling attention to the ongoing family separation crisis.