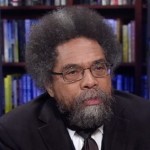 In the wake of Donald Trump’s election victory over Hillary Clinton, some progressives are now pushing a shake-up of the Democratic Party’s leadership in efforts to reform the party. But Cornel West says he doubts the Democratic Party can be reformed.