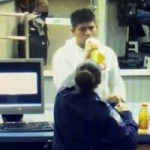 Wray Confirmed as FBI Director as Questions Swirl over His Past Record & Close Ties to Big Business
The Senate on Tuesday confirmed Christopher Wray as the next director of the FBI, but in an unprecedented move, five senators voted against his nomination. Before yesterday, only one senator had ever voted against an FBI nominee. In addition, three senators abstained from the vote. Senator Ron Wyden, who voted against Wray’s confirmation, said he did so because of Wray’s position on government surveillance. “In his public and private statements, Chris Wray failed to oppose government backdoors into Americans’ personal devices, or to acknowledge the facts about encryption. That it isn’t about liberty versus security, it’s about more security versus less security.” The American Civil Liberties Union also criticized Wray for his involvement in the U.S. torture program under George W. Bush.

Explosive Lawsuit: White House & Fox Peddled Seth Rich Conspiracies to Distract from Russia Probe
An explosive lawsuit filed by a former Fox News contributor is alleging that his former network fabricated quotes and worked directly with the White House to push a fake news story to prop up conspiracy theories linking the murder of DNC staffer Seth Rich last year to WikiLeaks. Rich was an aide at the Democratic National Committee who was fatally shot in Washington, D.C., in July 2016. In May of this year, Fox News published a piece titled “DC Murder Mystery: Slain DNC Staffer Was Wikileaks’ Source, Say Investigators.” The article claimed that Rich—not the Russians—provided WikiLeaks with internal emails from the DNC. The only person quoted in the piece—Fox contributor and retired D.C. police detective Rod Wheeler—is claiming Fox knowingly attributed false quotes to him. The complaint also alleges direct White House involvement in the story.

Death at the Border: How CBP Agents Urged Mexican Teen to Drink the Liquid Meth That Killed Him
Newly released video footage shows U.S. Customs and Border Protection agents telling 16-year-old Mexican teenager Cruz Velazquez to drink from a bottle of liquid methamphetamine at a border checkpoint in San Diego, causing him to die from an acute drug overdose. In 2013, the teenager was crossing from Tijuana to California with two bottles of what he claimed was apple juice. The video shows the border agents, who suspected the liquid was liquid meth, repeatedly encouraging the teenager to drink from it and prove he wasn’t lying. Minutes after the teenager sipped on the liquid, his body began convulsing, and he began shouting “my heart” in Spanish. He passed away shortly after. The agents only tested the liquid after Cruz took several sips and began overdosing. The officers were never disciplined. Critics say Velazquez’s case is just the latest example of rampant abuse and mistreatment by border agents.