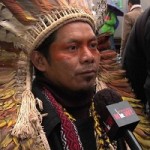 Democracy Now! broadcasts live from the U.N. climate summit in Bonn, Germany, where representatives from nearly 200 nations have gathered for negotiations aimed at bolstering the landmark 2015 Paris climate accord. Donald Trump has vowed to pull the United States out of the accord.

CA Gov. Jerry Brown Tells Indigenous Activists Protesting Fracking He’ll Put Them “In the Ground”
Democracy Now! broadcasts live from the U.N. climate summit in Bonn, Germany, where representatives from nearly 200 nations have gathered for negotiations aimed at bolstering the landmark 2015 Paris climate accord. This year’s climate change conference comes after Donald Trump has vowed to pull the United States out of the Paris climate accord, but there are still a number of U.S. delegations in Bonn. One is a coalition of U.S. lawmakers, universities, companies and faith groups that is staging an anti-Trump revolt by rejecting Trump’s action and declaring, “We are still in.” On Saturday, a group of protesters, many of whom were Native American, disrupted California Governor Jerry Brown’s speech at Bonn, calling on California to ban fracking, yelling, “Keep it in the ground!”

COP23: Activists from Puerto Rico to Island Nations Demand Climate Reparations, End to Fossil Fuels
At the U.N. climate summit in Bonn, Germany, Democracy Now! was there when thousands of people took to the streets Saturday for a march to demand an end to fossil fuel extraction, and some also called for climate reparations.

Thousands Protest in Manila as Trump Hails “Great Relationship” with Philippines President Duterte
Donald Trump is visiting the Philippines as part of his 13-day trip across Asia, where he met with Philippines President Rodrigo Duterte and said the two have a “great relationship.” Since taking office in 2016, the controversial Filipino leader has presided over a bloody so-called war on drugs in which more than 7,000 people have been extrajudicially killed by police or vigilantes. It is unclear whether Trump raised the issue of human rights when he saw Duterte. Tetet Lauron, program manager for climate justice at IBON International, was a member of the Philippines delegation to the United Nations climate summits from 2011 to 2013.

Amid Sea Level Rise & Devastating Storm, Island Nations Call for “Real Climate Leadership” at COP23
As the second week of the U.N. climate conference gets underway in Bonn, Germany, two activists speak about the impact of climate change on their countries, and their goals for this year’s talks. “It was devastating to see thousands of homes damaged, and about 40 people lost their lives,” says George Nacewa, Fiji islander and 350.org Pacific Climate Warrior. “This is something we’ve never experienced before.” Meanwhile, Tetet Lauron, a former member of the Philippines delegation, says negotiators must increase their sense of urgency “to avoid runaway climate change.”