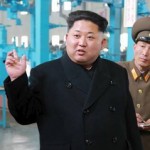 The leaders of North and South Korea announced today that they will hold a historic meeting on April 27. The news comes after Kim Jong-un’s surprise trip to China this week to meet with Chinese President Xi Jinping, where he reportedly said he was willing to give up North Korea’s nuclear weapons.

As North Korea Talks with China, South Korea & Japan, Could Bolton Derail Denuclearization Progress?
The leaders of North and South Korea announced today that they will hold a historic meeting on April 27, coming together for talks for the first time in more than a decade. The news comes after Kim Jong-un’s surprise trip to China this week to meet with Chinese President Xi Jinping, where he reportedly said he was willing to give up North Korea’s nuclear weapons. Kim is due to meet sometime soon with President Trump, although a date has not been set for that summit. It would be the first-ever meeting between a sitting U.S. president and a North Korean leader.

NYC Minister: I’m Willing to Be Arrested If ICE Comes for Immigrant Mother in Sanctuary in My Church
A few weeks ago, the Fourth Universalist Society of New York City opened its doors to Guatemalan mother Aura Hernández, who took sanctuary to avoid her deportation to Guatemala. Last year, the congregation voted to become a sanctuary church; shortly thereafter, the church was vandalized with swastikas carved into the church’s front doors. On Tuesday night, Democracy Now! sat down with the senior minister of the Unitarian church, Rev. Schuyler Vogel.

“I Am Raising My Voice”: Guatemalan Mother in Sanctuary in NYC Accuses Border Patrol of Sexual Abuse
Democracy Now! broadcast an exclusive interview with a Guatemalan woman named Aura Hernández, who has taken sanctuary in the Fourth Universalist Society of New York, the Unitarian church on Manhattan’s Upper West Side, to avoid her deportation to Guatemala. She has been living in the United States for 13 years. She’s the mother of two U.S.-born children: 10-year-old Victor Daniel and 14-month-old Camila Guadalupe. She entered sanctuary a few weeks ago to keep her family united as she continues to fight her immigration case. She says that in 2005, when she first entered the United States, she was sexually abused while detained by the Border Patrol in Texas. She says the officer who abused her then threatened to come find her if she ever went public about the abuse. She has fought for years, quietly, to obtain a U visa as a result of the alleged sexual abuse. U visas are for the victims of certain crimes who cooperate with law enforcement. She says that despite her cooperation with authorities, the Department of Homeland Security has refused to certify her U visa, meaning she has not yet been able to obtain protections to stay in the country. The Customs and Border Protection agency declined to comment. After being forced to take sanctuary to avoid her deportation, she is now breaking her silence. On Tuesday night, Democracy Now!’s Amy Goodman and Laura Gottesdiener sat down with Aura Hernández for her first-ever television interview.

Family to Bury Slain Sacramento Man Stephon Clark, as Protests Continue Demanding Justice
The family of Stephon Clark is holding his funeral today in Sacramento, California, as massive protests continue against the police shooting that killed the unarmed African-American man in his grandmother’s backyard on March 18. Police first claimed he was holding a gun, but later admitted they found only his cellphone near his body.