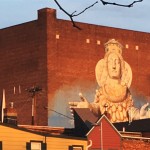 As Eric writes in this week’s Astrology Diary, the question that many people are wondering and that everyone should be wondering is: will enough potentially conscious, loving people wake up to facilitate society taking action? The new Uranus-Eris cycle has just begun. What will we do with this potential? 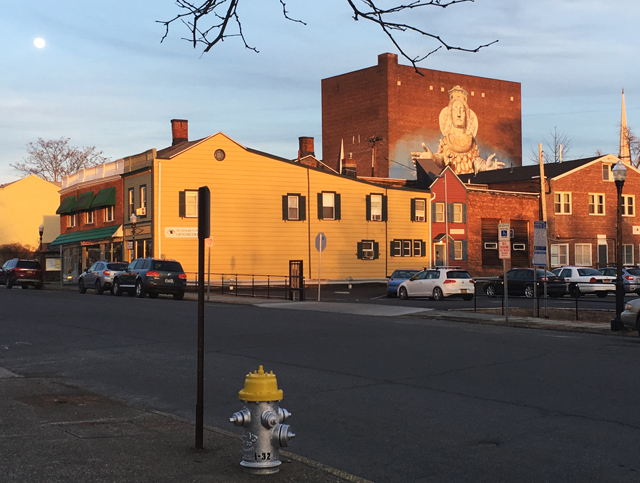 Portrait of Artemis, an artifact of the O+ Festival several years ago, looms above uptown Kingston. The artist is Andy Milford, also known as Gaia. To the left is Artemis herself, in Libra, heading for Full Moon.

Tonight before writing this, your Monday letter, my canine cousins and I took a walk around the block, one of those unusually wide blocks due to a feature in the landscape; and we got to walk through some interesting places. It was a perfect evening, just as Mercury had stationed retrograde in spring-like Taurus.

We walked to the edge of the neighborhood. I turned back around and noticed the Libra Moon rising, and then a representation of the goddess Artemis peering down from above the neighborhood. 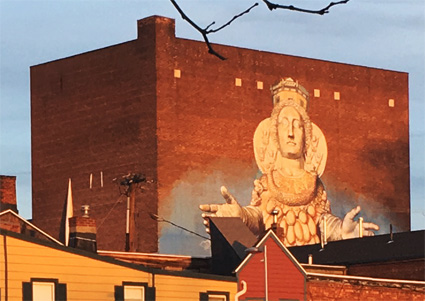 Detail of ‘Artemis rising from the quarry’, on the back wall of BSP, by Gaia Andrew Pisacane. The building originated as a Vaudeville house, became a movie theater, and ended up a furniture store, and is now a rock club and multi-purpose space, managed by Trevor Dunworth, in Kingston.

You can’t really see the perspective in this photo, but that building Artemis is painted onto is a six-story canvas, a daunting structure for a small town.

Local Christians were not thrilled that a heathen matriarch adorned their town; the artists (one called Gaia, and his sponsors) got their way. We all must live with the Moon, which reaches exact full phase in Libra Tuesday at 2:08 am EDT (06:08 UTC).

Currently in Libra, Luna is heading for a conjunction to Jupiter tomorrow. The Sun, for its part, is about to pass through the still-very-close Uranus-Eris conjunction. That holds a sustained peak for 48 hours beginning Wednesday morning. It’s a proving moment for Uranus-Eris. Faster-moving Uranus is now pulling ahead of Eris, and this is the last conjunction from the Sun with the two so close to exactly conjunct.

Remember, though, that this is the beginning of a new Uranus-Eris cycle, which hints at why we sometimes see the most potent manifestations of these majestic and unusual conjunctions in the years following. What will we do with this potential?

Here’s the question that many people are wondering and that everyone should be wondering. Will enough potentially conscious, loving people wake up to facilitate society taking action? You know, in time to reverse any damage at all, be it social, environmental or military? Or are we going to be the next generation of lemmings to hand over our power and our lives?

Perhaps this is a question too big for society itself, though we might wonder why. Even so, it’s not too big for you. The choice to adopt some sane principles to guide one’s life, and to take hold of that personal-collective intersection in one’s life, is an individual choice. Yes, you’re conditioned by your environment not to be aware, not to care and not to think that your choice matters — though that does not erase the fact that your choice is all that matters. 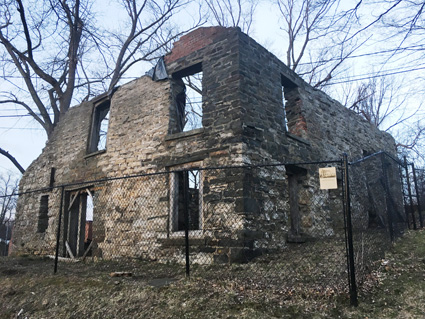 Ruins of Louw-Bogardus house on Frog Alley, Kingston. The site of a mill at the northwest bastion of something called the Stockade, it was built in 1676 by Pieter Cornelissen Louw. The relic is preserved by the Friends of Historic Kingston as of 1976. The city is dotted with stone houses from the Dutch and early British eras. Use this link for a larger view.

Who you think you are, what you do with your time and energy, how you spend your money, how you raise your children, how you engage in relationships, and the challenge of doing the right thing — that’s ALL up to you.

Meanwhile, we are now in the last week of Venus retrograde. That’s significant on its own, and also because Venus is approaching its exact conjunction with Chiron, now in the final and perhaps most significant seasons of its eight-year trip across Pisces.

At the heart of what ails so many people is an emotional matter, which takes many forms: the struggle to feel safe; in particular, safe enough to be vulnerable enough to love and be loved. I am figuring out that most people don’t know how high-strung they are, how verging on frantic. All you need to do is relax a little more than the prevailing environment and you notice it.

This choice I was describing, the one about waking up to being loving enough to actually do something collectively about our collective problem — Venus conjunct Chiron is a model of the healing process. It’s a picture of ‘something has to give’.

That something would be you. There’s nothing else that can give, as far as you’re concerned. The empathy, the kindness, the small willingness (as A Course in Miracles calls it) can only come from you. That’s another way of saying, it’s time to stop projecting this power outside ourselves.

Time to stop hiding or holding back passion, time to be friendly to one another, and time to let go of this seemingly frantic anxiety about going off-script and just being ourselves. As Thaddeus Golas put it so wittily, we’re all there is. There’s nobody in here but us chickens.

And that comes down to you. Baby, baby, baby, light the way.

6 thoughts on “Artemis on the Rise”