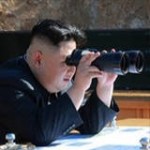 A Step Toward Peace? South Korea Announces Trump Will Meet with North Korea’s Kim Jong-un
The White House says President Trump has accepted an invitation to meet directly with North Korea’s leader, Kim Jong-un. South Korea’s National Security Adviser Chung Eui-yong spoke with reporters Thursday night outside the White House after briefing officials on the recent talks between Seoul and Pyongyang, and said the meeting would take place within two months. No sitting U.S. president has ever met with a North Korean leader; Kim Jong-un has never met another sitting head of state.

How an Alabama Town Is Fighting Against Cancerous & Toxic Coal Ash Dumping—No Thanks to Trump’s EPA
Residents of Uniontown, Alabama, have lived with the Arrowhead landfill, which is twice the size of New York’s Central Park, have protested shipments of toxic coal ash—the residual byproduct of burning coal—from a massive spill in Kingston, Tennessee, believed to be the largest coal ash disaster in U.S. history. For two years, nearly 4 million tons of coal ash was also shipped by rail from a mostly white Tennessee county to Uniontown. Coal ash contains toxins, including arsenic, mercury and boron, that can affect the nervous and reproductive systems and cause other health problems. According to the EPA, people living within a mile of unlined coal ash storage ponds have a one-in-50 risk of developing cancer. In 2013, some Uniontown residents filed a complaint under Title VI of the Civil Rights Act. This week, the EPA dismissed the claim, saying there was “insufficient evidence.”

Toxic Coal Ash Being Dumped in Puerto Rico, Which Already Suffers Worst Drinking Water in the Nation
Even before Hurricane Maria struck the island nearly six months ago, the majority of Puerto Rico’s residents lived with water that violated health standards set by the U.S. law. Since the storm, residents say the situation has only gotten worse. Among the sources of potential water contamination are mountains of coal ash generated by a coal-fired power plant owned by a private company called AES. For years, residents have demanded the company stop dumping toxic coal ash into their community, saying the waste is poisonous to their health and the environment.

Overlooked: How Women Like Diane Arbus & Ida B. Wells Were Omitted from The NYT Obituaries
As the world marked International Women’s Day on Wednesday, The New York Times began a new project highlighting the lives of remarkable women who never had an obituary in the paper, until now. The list might surprise you. It includes the pioneering anti-lynching journalist Ida B. Wells; the writer and poet Sylvia Plath; Qiu Jin, who was known as China’s Joan of Arc; the groundbreaking photographer Diane Arbus; the woman who helped engineer the Brooklyn Bridge, Emily Warren Roebling; Charlotte Brontë, who wrote “Jane Eyre”; Henrietta Lacks, whose cells led to a medical revolution; and Ada Lovelace, who is considered to be the world’s first computer programmer. The New York Times is calling the project “Overlooked,” and it is part of an effort to make up for the paper’s 167-year history of focusing largely on men—mostly white men—in the obituary pages.