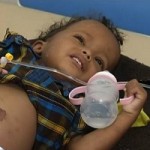 “An absolute shame on humanity.” That’s how the international aid organization CARE is describing the deepening humanitarian crisis in Yemen. The number of cholera cases in Yemen has now topped 368,000, with 1,828 deaths.

Minneapolis Police Chief Resigns over the Cop Shooting of Unarmed Woman. Will the Mayor Be Next?
Minneapolis Police Chief Janee Harteau has resigned amid growing protests over the police killing of unarmed Australian woman Justine Ruszczyk. Many residents are now calling for the resignation of the mayor, Betsy Hodges, saying the killing of Ruszczyk, which came after she called 911 twice to report a possible sexual assault near her home, shows an institutional problem with the city’s police.

Criminologist Phil Stinson: Police Kill Three People Every Single Day in the United States
As outrage grows in Minneapolis over the killing of an unarmed white Australian woman, this segment looks at the staggering number of fatal police shootings in the United States.

“A Forgotten Crisis”: Yemen’s Aid Workers Speak Out About the World’s Worst Humanitarian Disaster
“An absolute shame on humanity.” That’s how the international aid organization CARE is describing the deepening humanitarian crisis in Yemen. The number of cholera cases in Yemen has now topped 368,000, with 1,828 deaths. The World Health Organization estimates some 5,000 Yemenis are falling sick daily—and Oxfam projects the number of suspected cases of cholera could rise to more than 600,000, making the epidemic “the largest ever recorded in any country in a single year since records began.”

“Incoherent Policy”: U.S. Imposes Sanctions on Iran Even as Trump Admits Iran Following Nuclear Deal
The State Department has announced new sanctions against Iran over alleged support for terrorism and Iran’s ballistic missile program. The move will blacklist 18 people accused of having ties to Iran’s military, freezing any of their U.S. assets. The new U.S. sanctions came just after the Trump administration begrudgingly certified that Iran has complied with its obligations under the Obama-brokered nuclear agreement. According to the magazine Foreign Policy, Trump has instructed a group of trusted White House staffers to make the potential case for withholding certification of Iran at the next 90-day review of the nuclear deal.