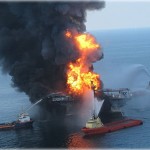 Incredibly, it’s been five years today since the largest offshore-drilling oil spill in the US: the Deepwater Horizon explosion and spill, which occurred just hours after Chiron entered Pisces on April 20, 2010. Featured here are two of Eric’s articles from our subscriber editions looking at the astrology of that event.

Almost unbelievably, it’s been five years today since the largest offshore-drilling oil spill in the U.S.: the Deepwater Horizon explosion and spill. The event occurred just hours after Chiron entered Pisces on April 20, 2010 (sadly and ironically just two days before Earth Day) — making it a clarion call to take a hard look at the health of this planet’s waters. 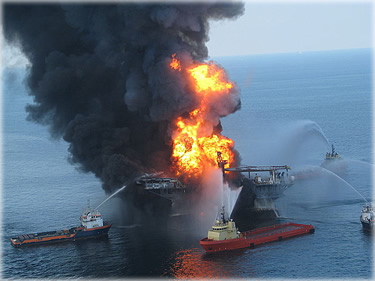 The BP oil spill was the worst disaster in the Gulf Of Mexico since Katrina and the world’s worst oil spill since the Exxon Valdez incident. Its effects continue. Photo: Gather.com

Eric, his longtime colleague and mentor Carol van Strum, and the network of Planet Waves researchers sprung into action immediately, gathering information about Deepwater Horizon and analyzing the astrological chart for the explosion and spill, as well as government documents related to the incident.

A series of articles documented that the spill happened near underwater munitions dump sites at the bottom of the Gulf of Mexico. Here is one article, and here is a follow up.

In May and July of that year, Planet Waves also produced two notable feature articles on the event for our subscribing members: Tales from Topographic Oceans, from May 7, 2010; and A Pause in the Anti-Sixties, from July 16, 2010, when it looked like the continuously leaking oil well had finally been capped.

Planet Waves also published intermittent blog posts on the progress of the spill and subsequent cleanup. In more recent years, ECO items in subscriber issues noted the slow recovery in the Gulf of Mexico — both of the ecosystem and of the industries (such as shrimping) that rely on it.

According to the Natural Resources Defense Council today, “Five years later, offshore oil and gas production in the Gulf is little safer, and by some measures, even more dangerous. There may be fewer oil wells in the region than before the blowout, but regulators have counted more accidents, spills and other hazardous incidents per well.”

While this is disheartening, it, too, points to Chiron. Still in Pisces, this centaur planet with a critical message continues to ask for our attention. Its work — our work — is not yet done when it comes to this planet’s oceans.

If you’ve been with Planet Waves for a few years, you’ve probably come to expect the level of astrological insight offered in those two linked subscriber editions above; astrology used to help us understand and learn from some of the most important world events we’ve all witnessed. If you’re a new visitor, I hope you’ll dive in and take a good look; what you read in those two members’ issues is only one facet of what you can expect with a Core Community Pass to Planet Waves.

2 thoughts on “It’s Been Five Years Since Deepwater Horizon”