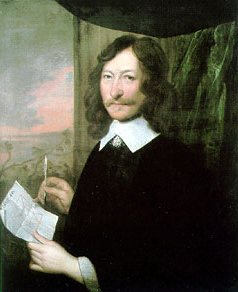 My Friend, whoever thou art, that with so much ease shalt receive the benefit of my hard studies, and doest intend to proceed  in this heavenly knowledge of the stars; wherein the great and admirable works of the invisible and al-glorious God are so manifestly apparent. In the first place, consider and admire thy Creator, and be thankful unto him, be thou humble, and let no natural knowledge, how profound or transcendant soever it be, elate thy mind to neglect that Divine Providence, by whose aI-seeing order and appointment, all things heavenly and earthly have their constant motion: the more thy knowledge is enlarged, the more do thou magnify the power and wisdom  of Almighty God, and strive to preserve thyself in his favour; for the more holy thou art, and more neer to God, the purer judgment thou shalt give. Beware of pride and self-conceit: and remember how that long ago, no irrational creature durst offend Man the Microcosm, but did faithfully serve and obey him; so long as he was Mr.1 of his own reason and passions, or until he subjected his Will to the unreasonable part. But, alas! when iniquity abounded, and man gave the reins to his own affection, and deserted reason, then every beast, creature, and outward harmful thing, became rebellious to his command. Stand fast oh, man! to thy God: then consider thy own nobleness; how all created things, both present and to come, were for thy sake created;  nay, for thy sake God became man: thou art that creature, who, being conversant with Christ, livest and reignest  above the heavens, and sits above all power and authority. How many pre-eminences, privileges, advantages, hath God bestowed on thee? thou rangest above the heavens by contemplation, conceivest the motion and magnitude of the stars: thou talkest with angels, yea, with God himself: thou hast all creatures within thy dominion, and keepest the devils in subjection. Do not, then, for shame deface thy nature, or make thyself unworthy of such gifts, or deprive thyself of that great power, glory, and blessedness God hath allotted thee, by casting from thee his favour for possession of a few imperfect pleasures. Having considered thy God, and what thy self art, during thy being Gods servant; now receive instruction how in thy practice Iwould have thee carry thy self: As thou daily conversest with the heavens, so instruct and form thy mind according to the image of Divinity: learn all the ornaments of virtue, be sufficiently instructed therein: be humane, curteous, familiar to all, easie of access, afllict not the miserable with terror of harsh judgment; in such cases, let them know their hard fate by degrees; direct them to call on God to divert his judgments impending over them: be modest, conversant with the learned, civil, sober man, covet not an estate; give freely to the poor, both money and judgment: let no worldly wealth procure an erroneous judgment from you, or such that may dishonour the Art, or this divine Science: Love good men, cherish those honest men that cordially Study this Art: Be sparing in delivering Judgment against the Common-wealth thou livest in. Give not judgment of the death of your Prince; yet I know experimentally, that Reges subjacent legibus Stellarum.2 Marry a wife of thy own, rejoyce in the number of thy friends, avoid law and controversie: in your study be totus in illis3 that you may be singulus  in arte4 be not extravagant or desirous to learn every Science, be not aliquid in omnibus5 be faithfull, tenacious, betray no ones secrets, no, no I charge you never divulge either friend or enemies trust committed to thy faith. Instruct all men to live well: be a good example thy self; avoid the fashion of the times, love thy own native country; exprobrate no man, no not an enemy: be not dismaid, if ill spoken of, Conscientia mille testes.6 God suffers no sin unpunished, no lye unrevenged.

1 Mr. = Master
2 Kings are subject to the laws of the stars
3 wholly in those (studies)
4 singular in the Art
5 (knowing) something of everything
6 conscience has a thousand witnesses

One thought on “Epistle to the Student in Astrology”