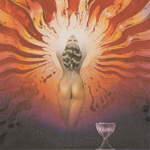 “The worst is over; now you can choose to take what it has given you, and transform it.” This statement forms the foundation to this week’s tarot reading by Sarah Taylor, who explores the Ten of Swords and how your experience of it could give you the key ingredient in an act of alchemy that has the potential to shift something from the shadows into the light.

“The worst is over; now you can choose to take what it has given you, and transform it.” 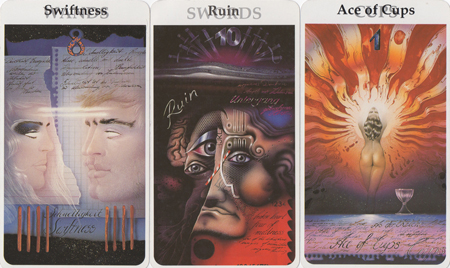 Eight of Wands, Ten of Swords, Ace of Cups from the Röhrig Tarot deck, created by Carl-W. Röhrig. Click on the image for a larger version.

The reaction that may be kicking in immediately is, actually, a taste of Swords in action: a thought you attach to a situation that has the ability to colour it all kinds of weird and chaotic; a thought that hides something beneath it; a thought that, for some reason, feels designed to stop you from looking for what’s really beneath.

So let’s look into the Ten of Swords — but only for a little bit. Just enough to see what’s useful. And after that, how about we look beyond it? Specifically, to the two cards that flank it, to the left, to the right. All three are linked.

I always like to bear in mind an interpretation of the Ten of Swords I came across in a discussion on a tarot forum. There, someone referred to it as “the card of the drama queen.” I think it makes a good point, and this point comes in the form of bad news and good news.

I’m going to take the traditional tack and go with the bad news first, which is: something has indeed happened. A deal was broken, a relationship didn’t live up to expectations, a job was lost, an unexpected downturn tapped you on the shoulder, a virus morphed into a secondary infection. That’s all there to be seen on the surface of the Ten of Swords, as unapologetic in its expression as the card is.

But the good news is this (and it was revelatory for me): the worst has already happened. The drama queen knows the drama has passed. She is simply singing an old tune, drawing out as much as she can from her experience. You can learn from your inner drama queen: you’ve reached the peak. The dark night has come, and the dawn is about to break over the horizon. You stuck it out, and you saw it through. The drama only continues if you choose not to let that dawning of the light in. That’s why the Ten of Swords was labelled a drama queen. What is passed is done, and yet the mind can still cling to it as a living, breathing reality.

That creature in the Ten of Swords can’t continue to live. Right here, right now, it is only your thoughts about what you’ve been through that give it life.

When I was writing the card correspondences below this article, I mistyped the “Ten” in the Ten of Swords: instead, I typed “tend.” I believe this is on point. Gather up those ugly-beautiful, mismatched, disparate pieces and hold them until they find a home. Share what you are going through with someone who sees you — not just with their eyes, but with their heart. Now you may start to see the alchemy that the Ten of Swords is offering you.

At the top of the Ten, there are two parallel, light-grey seams that look like they’ve been squeezed onto the card from a paint tube. Look to the left, and you’ll see a mirror of them again in the lines that pass between the man and the woman in the Eight of Wands. Except this time, the lines are straighter, whiter and brighter. They are lines of light, less viscous, signifying an exchange from one third eye to the other. There is an intuitive connection that is asking to be harnessed. There is a ‘separateness’ to the figures in the Eight that stands in direct contrast to the hoard of the Ten. There is room to breathe, there is “you” and “me,” and the eyes are spaciousness itself. Take your Ten — take what you have gathered from your pain — and transform it.

The same holds true for the card on the other side — the Ace of Cups. When I look at the rays emanating from the Ace, I see a metamorphosis from the arc of swords at the top of the Ten of Swords, and a naked, ecstatic woman who has taken the place of the dim, red light beneath them.

Take your heart, and transform what you have been given from your time of ‘ruin’. Because if there’s one thing that it has given you, it is an awareness that you have a heart. You can feel it, alive, beating and glowing inside you. It can feel pain, and it can radiate healing. I’m really not sure one of those happens without the other.

You are built of sturdy, enduring stuff — if you were to look past your mind and see the bounty that lies in what you have to offer yourself and others, not in spite of your experience of the Ten of Swords, but because of it. Your broken heart simply broke open. Your mind has simply been released to see more than the darkness. Your solitude has given way to an opportunity for communion.

Astrology/Elemental correspondences: Eight of Wands (Mercury in Sagittarius), Ten of Swords (Sun in Gemini), Ace of Cups (the pure, limitless potential of Water)