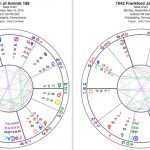 The 1943 crash was caused by a mechanical malfunction — a piece of overheated equipment that caused an axle to snap, which then derailed a long train carrying 541 passengers. Unlike many such incidents, the time was recorded and it’s possible to cast an accurate chart. 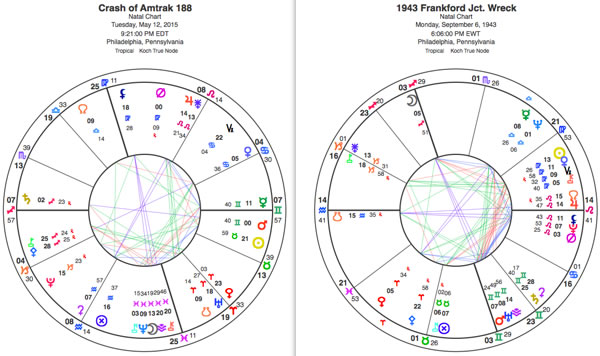 Side-by-side charts of the Amtrak 188 crash and the 1943 Pennsylvania Railroad crash, which took many lives and happened in the same place. They have many features in common. VIEW FULL-SIZE CHARTS.

Amtrak 188 crashed in the same place as another infamous, even more deadly train accident: the Frankford Junction crash of 1943. [View charts at full size.]

The 1943 crash was caused by a mechanical malfunction — a piece of overheated equipment that caused an axle to snap, which then derailed a long train carrying 541 passengers. Unlike many such incidents, the time was recorded and it’s possible to cast an accurate chart. Right away you can see the exact Jupiter-to-Jupiter conjunction between the two charts. In other words, in both crashes, Jupiter was in the same exact degree of Leo. 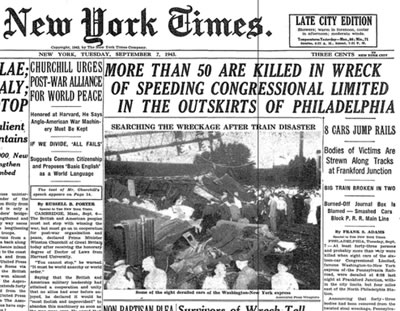 New York Times cover after the 1943 wreck at Frankford Junction.

Both charts also have angular Sagittarius (the sign of travel) — the MC in the 1943 chart and the ascendant in the Amtrak chart.

Yet amidst all that (and more — these charts are spookily rich with correspondences) the most striking thing that the two charts have in common is Mars in Gemini.

In the 1943 chart, Mars is about to make a conjunction to Uranus. This is why Mars-Uranus aspects are considered classic accident astrology, and any good astrologer would say be cool and slow down. You can read a description of the gruesome accident here.

In the current Amtrak chart, Mars is opposite Saturn, another kind of aspect that indicates stress and pent up energy needing to be released.

But the to-the-degree, timed-to-the-minute aspect involves the 7th house cusp of the Amtrak chart intersecting exactly with Mars in the 1943 chart. This highlights the role of Mars in both charts. In the current accident this manifested as excess speed. In the 1943 chart, Mars manifested as a fire breaking out in a piece of equipment, leading to a chain reaction of events.

In the 1943 chart, notice that the Moon in Sagittarius is high above the chart (angular, on the 10th house cusp), about to oppose Mars-Uranus. In an event chart, the thing the Moon does next is one of the most important facts.

In the Amtrak chart, the Moon also busy. It’s in Pisces, describing the spaced-out nature of the consciousness involved. The Moon makes a different series of aspects — first to Juno, then to Jupiter, then to Pluto.

Still, the involvement of a powerfully aspected Mars in Gemini in these two crashes in the same place cannot be missed, and astrologers would do well to take note.

11 thoughts on “Train Crashes at Frankford Jct. Have Eerie Similarities”