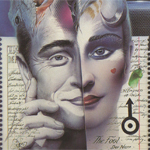 To propel yourself forward over a chasm describing the unknown and into a different place is an act of bravery. It is also an act without compromise, because to do it part-way means to fall into the chasm itself, and to do it not at all means to stay where you are.

This is a reading of two halves: two halves in each card. Let’s explore how these two-halved cards are able to dance together to form a whole that, if not resolved, is an ongoing balance of opposites.

The further paradox of this balancing game is that it is an ‘all-or-nothing’ commitment; you are either fully in, or fully out. What is clear, though, is no matter your decision, it is going to ask for a giant step into the unknown. 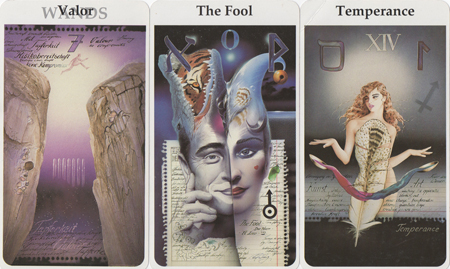 Seven of Wands, The Fool, Temperance from the Röhrig Tarot deck, created by Carl-W. Röhrig. Click on the image for a larger version.

What strikes me first is the relationship between the Seven of Wands — or Valor — and The Fool. When I first looked at the two cards, I realised that the figure in the Seven of Wands is enacting what it is that the figure of the Fool seems to be about to do in many of the more traditional depictions of The Fool: taking a leap off a cliff, towards and into the mystery.

The very little English writing on the Seven of Wands offers us this:

And the two go hand-in-hand. To propel yourself forward over a chasm describing the unknown and into a different place is an act of bravery. It is also an act without compromise, because to do it part-way means to fall into the chasm itself, and to do it not at all means to stay where you are. What does this mean? Essentially there are three choices in front of you: to stay where you are; to offer conditional commitment, which puts you in a no-man’s-land, where there is a sense of psychic loss that asks for a renewed period of excavation; or to leap, fully, across that no-man’s-land and into a new land, where nothing is guaranteed save for the fact that you know that you have no idea what you are committing to.

The card, however, suggests that it is an action worth considering. It asks of you “valor,” and in The Fool’s Journey it is that bravery that informs the first step of The Fool along a path that, yes, will test him and will bring him new adventures, but which will also bring him the opportunity to follow the call of his Soul. And if there is a calling that is worth following more — if your desire is to live fully, to know yourself better, to expand your sense of what is possible — then it is eluding me right now.

And so the hero/heroine leaps — and so leaps into the world, and the state, of The Fool.

I love this beautiful Fool in the Röhrig deck. Masculine and feminine — and yet both edgy in their own rights: the masculine black and white with a clown mouth, the feminine decorative, heart on cheek. Together, they seek to find a balance with the resources that they have. Neither together nor apart do they form what we might consider to be a ‘conventional’ whole. And why should they? As humans stepping out on our own odysseys, we are beautifully, intricately, delicately, compellingly flawed.

We are two sides seeking union among the riches of our idiosyncrasies, our complexes, unpredictability, and magic. And yet we are heroes and heroines, and all in between.

The willingness to risk. That is The Fool in four words. He is the initiator, the instigator — very often at the hands of his own innocence or ignorance. But it isn’t willful or stupid ignorance; it is simply because he cannot know. How could he know what he is letting himself in for? Why, then he wouldn’t be The Fool!

We are Fools when we eschew convention and the well-worn path and strike out on our own, no matter the consequences that we are warned to take heed of — to fear, even. And, when we are holding to the spirit of adventure that The Fool embodies, we do this not as an act of rebellion. We do it as an unbridled act of Self-definition.

The final card underlines this further, and also brings in a stabilising factor. Again, we have similar qualities in the written descriptors:

Alongside these, though, there are “uniting the opposites,” and “blanking out.”

Temperance describes the process of alchemy that happens when we learn to unite two opposites — in this case the elements of fire and water (“Feuer und Wasser“). One possible outcome of this is that we cancel both elements out. This is a fine art we are talking about here; it takes the courage of The Fool, and the precision of one — such as you — who is devoted to the craft of one’s life. It is when you are able to unite opposites that you create the kind of reaction that gives you a new substance that had previously been unavailable to you.

You have created your own inner gold.

This is your Great Work calling to you, and you have everything you need to bring forth what serves you. What it asks of you is courage — to move into the unknown with a decisiveness that takes you all the way there — and the ability to work with what feels like two forces at odds with each other but which, when brought together in just the right way, bring you something you never thought possible.

So, there you are, standing on the precipice. It might not, after all, be the abyss that you thought it was. And — wonder of all wonders — you get to find out for yourself.