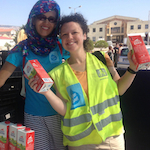 Amanda Painter’s dear friend from high school, Marcy Franck, is currently in Greece bringing supplies and a heartful of human caring to Syrian refugees in Greece. We’ll be posting her updates over the course of the next week. Here are the first two as we catch up with her postings on Facebook.

Editor’s Note: My dear friend from high school, Marcy Franck, is currently in Greece bringing supplies and a heartful of human caring to Syrian refugees in Greece. Her trip was originally supposed to include a stop in Turkey, until the failed coup and its fallout. She wrote in her first post about the trip, “I fear that being surrounded by people whose needs surpass what I can give will damage my already broken heart beyond repair. But I’ll remind myself I’m here to stand beside them in a world that seems otherwise unwelcoming. If they are strong enough to live though this, I am strong enough to stand with them for a little while.” Below are her second and third blog posts, combined. — Amanda P. 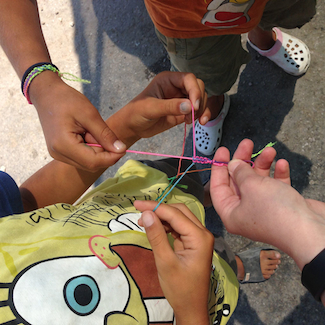 “Mustafa, the overnight bracelet-making maestro. That’s my hand holding one end, and his friend holding the other.” Photo by Marcy Franck.

Today I had no idea what I was doing. I was the new kid, plopped into a place where there are systems and norms that I didn’t know. So mostly I tried to watch and learn.

Watching and learning was fun until I needed to participate and realized I have good intentions but limited ability.

Take, for example, this friendship bracelet. Another volunteer in my group brought some thread to teach the kids how to make bracelets. It was one of those things where you see someone do it and think it looks easy, then you realize you have no idea how to replicate it. Most of the younger kids fell into this category, so I was in good company.

And I’d pretend to be a very good teacher who was empowering her student. “No, no, no… you! YOU do it!” and then he’d try and get confused and look to me to help, so I’d try too, then get confused and look back at him. It was a pathetic little circle of helplessness. So I promised I’d go learn how to do it and then come back and teach him.

All the kids had bracelet-making stations taped to the ground, all the way down the sidewalk. And they were all giving it the ol’ college try. Even the really young kids were totally focused and devoted to making a masterpiece. But inevitably one would ask me for help, and then I’d mess up their bracelets, and then I’d promise to go learn how to do it and come back to help.

I finally made my way down the sidewalk to the volunteer with all the skills. I watched, thought it looked easy, then went back and messed up another bracelet. On my third time watching, divine intervention took over and I finally got it. I tied about three awesome knots, then I lost my knack and decided to screw perfection and go for wild abandon.

I found Mustafa, who kept looping and tying a slightly different way each time. After each knot I’d give him a high five and he’d look quite proud of himself. That was my favorite part.

In the end he got a colorful thing that wrapped around his wrist and he felt good about it.

The older kid next to us kept his head down and his focus sharp, and when the bracelet got close to done and it got harder to knot, he let me hold down the ends so he could finish his work.

Then he let me tie it on his wrist.

But after lunch I found him walking around, bare-wristed.

“Where is your bracelet?” I asked, holding up his arm.

“Sister,” he said, with just about the biggest smile I’ve ever seen.

Cups of milk poured: 5 bazillion
Women’s clothing items counted: 377
Kids flipped and swung: 2
Stickers given out: 143
To the same kid until I started paying attention: 13 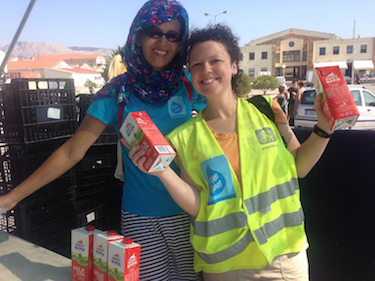 The two Milk Maids of Souda Camp, on the island of Chios, Greece. “She handed me cups as I barked things like ‘Let’s make a box of four!'” Photo courtesy of Marcy Franck.

The day started with a hearty breakfast for camp residents: 3/4 cup milk, 1 banana, 1 breakfast sandwich, 1 hardboiled egg. I was on milk detail and I totally didn’t mess it up even though it involved math. ‪#‎tellmymom‬ ‪#‎soproud‬

It’s a complicated system that relies on counting down from seven, because that’s how many cups are in a box of milk. I am easily distracted and not good at repetitive tasks (flashback: Corporate Binder Photocopying Debacle of ’98), but when you worry about cheating a kid out of his daily allowance of milk, suddenly things you suck at become things you excel at, because they have to.

Thankfully pouring milk is easier than making friendship bracelets which, as you know, I totally failed yesterday.

This is the deal: There are seven cups of milk in a box, so if you pour out one, you can keep the remaining six in the box so that a person picking up breakfast for a family of six can take a box instead of six wobbly, spilly cups back to their tent. It was my job to keep enough cups full while also making boxes of 6, 5, and 4 cups. This might sound easy to you but there are lots of distractions and the fear of repeating the Great Photocopying Debacle kept my heart pounding in my ears.

But divine intervention kept me focused and everyone got milk. My favorite part of food distribution comes at the end, when there are leftovers and we can give them out to people who want more. We ran out of cups but the last straggler got himself a box of 4.

After breakfast I went to the warehouse where we store all the material donations–things like clothes, baby carriers, diapers, strollers, and other supplies.

We are gearing up for a big distribution of women’s clothing this weekend, which means we needed to take inventory of what was in the warehouse so we could go shopping to fill in the gaps. (Donors, your donations will fund 1/3 of this distribution, which will provide some clothing for roughly 500 women at two camps on the island. I’ll post more details after this weekend. Thank you!!)

I volunteered to count women’s long sleeved shirts. These are very popular items, even in the heat of summer, because our residents prefer modest clothing.

I did my best to divide a foreign sizing system into small, medium, and large, mostly by holding up a top to my own torso and guessing from there. It was not an exact science, and I don’t have a background in retail, so fingers crossed it works out in the end.

In the pile of donated clothing I found some really nice shirts, some horrid abominations made from 1980’s upholstery fabric, and a pair of CRAZY GIANT PANTS.

They were in the shirt pile because apparently no one could believe they were pants. When you hold them inside out or upside down or by one leg or the other, it’s plausible to imagine someone wearing it as a shawl or some such. But when I looked for the neck hole and couldn’t find one, I realized they had to be pants. 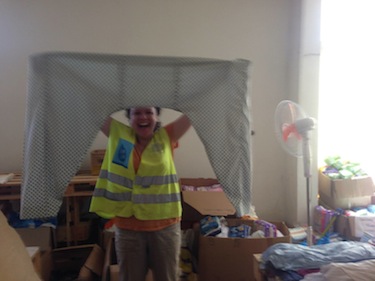 Marcy during inventory count at the warehouse. Called “shalvar,” pants like this have a slit for elastic and are adaptable for many sizes. “That’s a big old check next to the line item for giant pants.” Photo courtesy of Marcy Franck.

There’s a path for a draw string and I’m sure a fashionista has figured out a way to make these a formidable rival to hammer pants (‪#‎CantTouchThis‬) but I think they are hilarious and awesome.

Too big hold and manage a selfie, I asked someone to take my picture for the first time since I stood in front of the Kremlin 27 years ago. Because when God gives you pants like these, you have to drop everything and take a photo of yourself holding them, then post it immediately to the Internet. ‪#‎KodakMoment‬

In other news, Mustafa has honed his skill of making friendship bracelets and is now a maestro.

To learn more about my volunteer trip to help refugees, and to find out how you can help too (Big shop coming for the women’s clothing distribution!) follow this link.

4 thoughts on “The Helpers Are Helping”