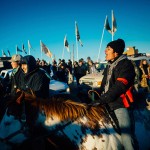 Yesterday, as caravans of veterans continued to join the thousands of veterans already converging in Standing Rock, as part of a lauded “self-deployment” aimed at shielding Water Protectors from further police violence, an unexpected victory was announced by the Army Corps of Engineers: The long-awaited easement permit that would allow completion of the Dakota Access pipeline (DAPL) would be withheld pending an environmental impact study. 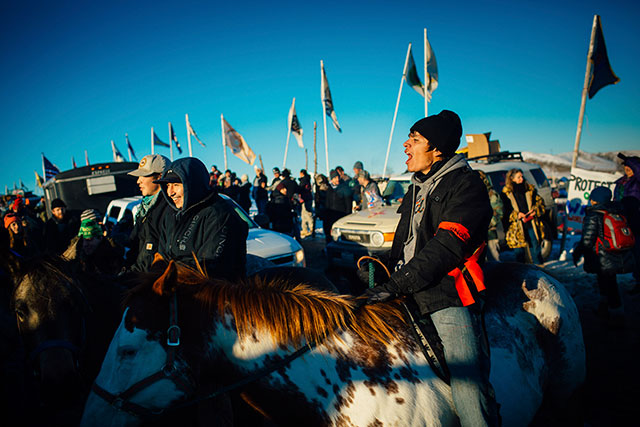 Atop his horse, Prophesy, JJ Stadel of the Cheyenne River Sioux of South Dakota celebrates after learning that permits would not be approved for a section of the Dakota Access pipeline, at the Oceti Sakowin protest camp, just outside the Standing Rock Sioux Reservation in Cannon Ball, North Dakota, December 4, 2016. (Photo: Alyssa Schukar / The New York Times)

Yesterday, as caravans of veterans continued to join the thousands of veterans already converging in Standing Rock, as part of a lauded “self-deployment” aimed at shielding Water Protectors from further police violence, an unexpected victory was announced by the Army Corps of Engineers: The long-awaited easement permit that would allow completion of the Dakota Access pipeline (DAPL) would be withheld pending an environmental impact study. Celebrations, both personal and public, erupted around the country, as Natives and other Water Protectors and supporters absorbed the news that eight months of collective action and prayer had yielded this moment, when the power structure itself blinked in the face of our unity.

For eight months, Water Protectors have held up calls to “kill the black snake” as a battle cry in Standing Rock. The phrase is a reference to a Lakota prophecy that says there will be a great black snake that will run through the land and bring destruction to the people and to the Earth. Now, politicians are being applauded and nonprofits are sending out fundraising emails that claim the black snake is, at long last, dead.

But here’s the thing: As long as there is money in this pipeline, there’s a good chance oil will follow. I have heard numerous arguments to the contrary, and would of course prefer for one of those arguments to prove true. Some believe that the pipeline will be rerouted, as the Army Corps of Engineers again hinted was possible (a “victory” that would be wholly incomplete, as the movement’s goal is to “kill the black snake,” not resituate it). Others have pointed out that the contracts that have kept the project funded are set to expire in the near future. But history has taught us that the Army Corps’ efforts to placate Water Protectors have no substantive value. The idea that this struggle might be resolved by a reroute effort rings hollow after so many months of dangled hopes and ongoing police violence. This administration has taken no concrete action to stop the pipeline, and has once again kicked the can down the road — this time into the hands of the Trump administration. And while it’s true that environmental impact statements can in fact take years to complete, no attention to detail — either legal or environmental — should be expected under a president-elect who has promised to govern in the style of an autocrat.

Before his surprise presidential victory, Donald Trump actually campaigned in Bismarck — the 90 percent white capital of North Dakota — speaking in support of extraction projects and pipelines like DAPL. Trump has made his intentions clear, and he will soon have all the power of the executive branch. He has outlined his plans with regard to struggles like this one, and we can’t afford not to take our autocrat-elect at his word.

In response to Sunday’s news, Energy Transfer Partners and Sunoco Logistics stated that the corporations remain “fully committed to ensuring that this vital project is brought to completion and fully expect to complete construction of the pipeline without any additional rerouting in and around Lake Oahe,” adding that, “Nothing this Administration has done today changes that in any way.” By referring to the authority at hand as “this Administration,” the corporate forces at work are clearly laying their cards on the table. They are betting on Trump, which seems a reasonable gamble.

In a response statement, the Sacred Stone encampment noted the companies’ remarks and added, “The Trump administration could easily approve the project early next year.” The Protectors also noted that, “The Obama Administration has never guaranteed the water protectors or the Standing Rock Sioux Tribe that they would use force to stop Dakota Access from drilling under the river without a permit, if necessary.”

We must be prepared for a rollback of our present gains under Trump, unless we continue to pressure those with the power to stop this pipeline. It’s not over until the money runs out, and while a number of funding contracts expire on January 1, financial contracts are not magic carriages that turn into pumpkins at midnight. If those investing in the pipeline still believe it will be a profitable venture (which, with the Trump administration about to take power, it well could be) they will not shut off the flow of cash.

Fortunately, we, the public, have something to say about whether or not this project remains profitable. Supporters and Protectors around the country have targeted financial institutions with protests and direct actions. Some have moved their money out of these banks to encourage them to divest from the pipeline project. And those efforts should continue.

In my years of organizing, I have learned that concessions should not be met with less action, but with more. When the opposition is weakened, in any way, we should swing harder until whatever we are fighting simply can’t pull itself from the floor again. This round may have been won, but there will be more battles to come, and if we do not remain vigilant, I have no doubt we will lose them.

In Trump and Energy Transfer Partners, we are dealing with intractable enemies. Both have stated their intentions, in no uncertain terms, with no regard for the law or the wishes of the current administration. And while President Obama may have skirted a potential stain on his legacy, the days ahead could bring more struggle than ever before.

Of course, I could be wrong. This whole project could crumble at our feet in the coming days in the wake of this blow, but no available evidence indicates Energy Transfer Partners will relent. With $3.7 billion at stake, corporate interests have repeatedly aligned with state power to incarcerate, brutalize and torture our people in order to push us from the path of this pipeline — both literally and figuratively. We as Native people have been underestimated at every turn, but we cannot afford to underestimate the enemies of our survival now.

That’s why, if you support this cause, you must continue to fight. Don’t let this story fade into the background of a moment rife with political conflict and discord. Do not stop talking about what our people are up against, or what they’ve endured so that the struggle could come this far. Do not stop moving your money. Do not stop rolling into banks associated with this pipeline, causing disruptions and shutting them down. Be as educated as you can, not just about DAPL, but about environmental racism, colonialism and the fight for Native sovereignty. If you have become a part of this movement moment, remain a part of this constellation of action and prayer, because it’s not over, and you are still needed.

I realize that some may feel I am minimizing a victory or taking a cynical view. I would argue that skepticism — as opposed to cynicism or outright optimism — is strategic. And we have to be strategic right now. Whether we are talking about actions at small bank branches, staged by troupes of friends who are new to movement work, or those braving the elements in Oceti Sakowin — almost 10,000 strong in a snowy landscape of empowered peoples — this is a story that remains unfinished. We are all armed with pens, and so is the other side, and I for one intend to keep writing.

All of that said, this is a moment of great joy and pride for many of us. Having repeatedly traveled to the front lines to lend whatever assistance I could, and with a number of friends having made a home there, I was more than moved when I heard about this development. As I sat in a restaurant with a friend, discussing television shows and holiday plans, I received word and found myself weeping and unable to focus on the messages I was receiving from friends, each echoing news we could barely believe. Those tears continued in sporadic episodes for hours, and as I write these words, on the night of this victory, I know I will probably continue to lose my composure. While others have sacrificed much more, I have given my heart to this struggle, and to its stories, which I have strived to tell in the name of justice and so that my people may live. I know I am not alone in this feeling of relief, knowing that we may have more time to wage this fight. And I am sure I am not the only one who felt as though my ancestors were watching as we gained this ground.

And yet, no one I know on the ground in Standing Rock intends to leave after hearing this news. They do not believe that Energy Transfer Partners will stop drilling, as the company has refused to honor restrictions placed upon it in the past. My friends likewise don’t believe that Trump will respect any effort to reconsider the path of the pipeline. The people I know and love in Standing Rock have dug in for a full fight, and their heels remain grounded in the soil of Lakota country.

It is our duty to likewise dig in, wherever we are, and fight with every tool at our disposal until the black snake is dead and gone. Our freedom, and the survival of the natural world itself, depend on our ability to stay united and oppose these acts of violence, against both land and human beings. We know that amid the havoc of climate change, all life on Earth hangs in the balance. With so much at stake we must not relent. So keep swinging. And don’t stop until our enemies can’t pull themselves from the floor.

Mni Wiconi. And it must always be protected.

5 thoughts on “#NoDAPL: Why the Black Snake Isn’t Slain”