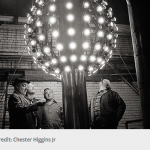 Like the Play-doh Company who can’t run fast enough from its new phallis-shaped extruder, most of us are eager to dodge the awkward reality of this artificial “holiday.” But if you count yourself among those for whom New Year’s Eve revels are necessary to the positive inauguration of your annual assholery, douchebaggery, or general incivility, you get to start this year with a bang.

WHEN OUR GRANNIES WERE YOUNG, no one got caught home alone New Year’s Eve. Not even if they were the parents of small people. I imagine it was the desperate need to drop the conservative social shackles and swing it fast and hard, if only for one night, that pushed them out the door. That, and there were a helluva a lot fewer cars on the road then. It wasn’t quite the death-defying maneuver it is today.

And with the advent of Netflix streaming and the end of socially acceptable smoking among the middle class, there’s no point in calling New Year’s Eve parties cool, either. Sane people stay home on New Year’s Eve with two finger’s of Maker’s Mark and a quart of Trader Joe’s Salted Caramel Gelato, and re-watch all four seasons of Battlestar Galactica, ffs. (Twelve zodiacal colonies, man!)

Except for the assholes. You know who you are, and I’ll get to you soon.

I blame this situation on crap history. There’s no natural motivation to celebrate January 1st as the first day of a new year. It’s not astronomically or astrologically aligned with anything in the cosmos to mark it for special recognition. That honor goes to the quarter and cross-quarter days of the ecliptic. Suprisingly for nearly 200 years the English had it right: their new year was celebrated on March 25th, near the spring equinox, and called Lady’s Day. Then sometime in 1752 they agreed to abandon The Virgin Mary and go Roman again. OLD Rome. Republican Rome. B.C.E. Rome.

Yes, Rome. Our January 1st New Year’s Day is actually based on the Roman legislative calendar. The new Roman consuls were installed on January 1st each year, and thus the legal year began. If you want to know what these consuls were, they were power-whores. That’s what. These guys craved work that looked like the love child of the 2011 US Congress and eight hours of Crossfire Kinsley-Novak debates. They were powerful, power-hungry, professional windbags. Gassy assholes.

So there you have it: January 1st celebrates the first day of Rome’s new batch of assholes. Which explains a lot about this holiday, if you think about it.

And now, to this year’s New Year’s Eve astrology. Like the Play-doh Company who can’t run fast enough from its new phallus-shaped extruder, most of us are eager to dodge the awkward reality of this artificial “holiday.” But if you count yourself among those for whom New Year’s Eve revels are necessary to the positive inauguration of your annual assholery, douchebaggery, or general incivility, you get to start this year with a bang.

First off, the Sun’s in Capricorn, getting ready to kiss Pluto and square the Nodes.

Capricorns dearly love their boundaries. “Good fences make good neighbors” is secretly written on the heart of every Cap. However, with Pluto in play tonight, treat yourself to a little border-crossing! I have a friend who, one New Year’s Eve, successfully talked an angry, drunk neighbor with a chainsaw from cutting down the hedge between their houses. It was very late and very dark. And the chainsaw was very loud. But I’m not sure even a solid, logical argument like “you’d do a much better job of it when you can actually see the shrubby” would hold back a Goat on the sauce tonight. But hey, you can try.

Experimental Aquarius Mars faces off against Exhibitionist Leo Jupiter. This is the “I wonder’d what happen if…” against “Hey, look at me!” set up. Professional bartenders call the New Year’s Eve crowd “amateur night,” and if you work this aspect well, you’ll prove them right. Toss back a few and start thinking you’re on the Avengers team.

Pissing on electrified fences, jumping off the hoods of cars, frisbee-flinging trash can lids, running through unlit neighborhoods with your crossbow, or thumping the hell out of inflatable snowmen and shouting “puny gods” all count as pointless, stupid acts of faux bravado.

Passing out on the billiard table before midnight because you only drink three nights out of the year qualifies as amateur, but not astrological. Wobbling around on Bambi legs, crying about your Christmas bills is not what we’re looking for either. Where’s your sparkle, dear? Show a little chutzpah!

Showing off your Austin Powers impersonation before midnight? Meh. In front of the police station? Maybe. In drag, waving an unregistered gun, while shouting for the Captain to come out and dance with you? That might work. However, the quality of your performance is key. Send us the tape and let us judge.

Defending your -ism fits here, too. Aquarius leans toward ideologies and -isms. It’s all theory. You might feel inspired to defend your currently preferred theories tonight. Jupiter in Leo will offer his ego, if you should need it, too. This could range from simple bar fights over Jets-ism versus Patriots-ism, to more complex debates in the back seat of a squad car over the role of capitalism in children’s theater, with someone who looks vaguely like your son’s third grade teacher. You can’t tell because you left your contacts in the bar’s bathroom, just before you told everyone there’s a bomb in the toilet. (Silly you! Someone forgot to flush.)

But really, Pholus is The Bang, here. He’s small but mighty. It’s like like a bottle of corked champagne beneath the whole night. Once popped, Pholus never goes back in the bottle. No, it lands all over the carpet. And you. And whatever pops out with Pholus at hand never seems to die. Ferguson is, in fact, Pholus’s 2014 posterchild.

Pholus in the sign of Sagittarius, particularly, is the perfect combo for mouthy, noxious declarations you can drop, like invisible banana peels, all over the host’s waxed parquet floor, just waiting for your victims to slip up when they contradict your opinion. Imagine where that could lead!

A Sag in the cups particularly loves to bluster about “the natives,” but if you’ve got a metaphysical types on your hands, expect them to go on and everlasting on about the dark secrets of the Large Hadron Particle Collider, or whether you can channel Jimi Hendrix by playing “The Wind Cries Mary” on five crystal champagne flutes and a silver-plated oyster fork. If you could just get Jimi on the line, who knows how history could turn?

Sagittarius enthusiasm syncs perfectly with Leo’s Jupiter, so go dominate the karaoke machine and claim that American Idol prize stolen from you in 2009! Pholus will definitely bust you out. What it might do for your reputation tomorrow is debatable, but holy wow! Tonight you’re Robert Fucking Plant.

Which leads me to the classic move of New Year’s Eve douchebaggery: walking off with your date’s purse while she hunts for a public toilet in Times Square. Go ahead and replace NYC with anywhere, actually; geography isn’t critical because this move works everywhere. But Times Square is the epicenter of American New Year’s Eve assholery; I think it deserves special respect.

Consider its detractions! It’s colder that a well-digger’s ass, the high school girls are drunk off their mother’s stilettos, and the tourists want to see Skrillex on the Jumbotron and watch — what? A ball. An electrified ball. Admittedly this was a wonder back in 1907 when it was introduced, but I think we’ve gotten beyond our fascination with blinky things now, yes?

But there you are. Now you’ve grown tired of Times Square. You’re cold, you’re bored, you’re stoned, and your date’s taking too long. Oh, and look! You’re holding her purse. Money for the train ticket back, too. Off you go, then.

I mean, what could possibly happen? You’ll wake up, pissed, in yesterday’s clothes with your (now) ex-girlfriend’s purse around your neck. So what? That’s a look. Right? Ha!

So you see, if you’re looking to follow Roman tradition, go pro-consul, and crown yourself governor general of jackasses. The champagne ain’t going back in the bottle after tonight, so what the hell. Tomorrow’s another year, Scarlett. If you desire it so, you’ll honor the Empire and fail gloriously tonight!

Me? I’ll be home with Starbuck and a pint of New York Super Fudge Chunk. Happy New Year.

So say we all.