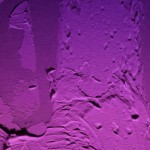 Part of knowing your power means knowing who your allies are and not hesitating to call on their assistance. Yet once the Moon enters Aries Monday and begins to square Mars and Pluto in Capricorn, the feeling tone of the day may shift to some species of lone wolf/go it alone. Try not to let yourself get caught in that one.

Before the Moon reaches an opposition to the Sun on Thursday (the Taurus Full Moon), it’s going to make many aspects, which translates to emotional movement, tension (meaning enhanced drama, for some) and the need for a constantly shifting point of view. If you’re feeling disoriented, shift your perspective. Look from another place, and notice what you see. 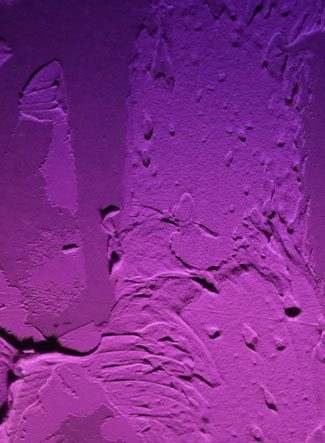 Stucco from the ‘big room’ at BSP — the former Kingston Vaudeville house. Photo by Eric Francis.

The Sun is now in fixed sign Scorpio, and the Full Moon will be in Taurus. The Moon is always at full phase in the sign opposite that of the Sun. The technical way to say “Full Moon” in astrology is Moon opposite Sun; hence they are in opposite signs when the Full Moon is exact.

Both Taurus and Scorpio are fixed signs. The tendency of fixed signs is to let it go until it breaks, though that is not proactive. It does not solve problems before they arise; it causes systems to get stressed out and lose efficiency — or worse, cease to function.

The current buildup to the Full Moon is about the need to adapt ongoing, and to learn something from each little point of crisis. (I originally typed earn something, and in this case learning would be earning — it usually is. If you think of learning as a process of earning, you will be more inclined to use what you know.)

The Moon is in Pisces as of this writing Sunday night. The Moon’s next major aspect is a trine to Saturn in Scorpio at 4:05 am EST Monday (09:05 UTC). This has a penetrating quality, as if you’re able to see through the emotional barriers that divide you from someone else. There’s no guarantee that you’ll like what you see, but you will get some information about what’s really going on, or at least have a viable hunch.

The Moon ingresses Aries at 1:52 pm EST Monday, which begins a whole new story — the Moon passing through the Uranus-Pluto square. This includes squares to Mars and Pluto and conjunctions to Uranus and Eris, between Monday afternoon/evening and 4:32 pm EST Wednesday when the Moon ingresses Taurus. This may be turbulent, and bring up a diversity of situations where you simply must keep your cool and pause before you react emotionally.

One way to do that, without putting on airs, pretending or going cold, is to understand where your power resides. Consider in advance what influence or direct control you have in every situation that might arise. When something shows up where you have not pre-done your power analysis, pause and investigate. You are never as powerless as you think, unless of course you are convinced of that fact and don’t think again.

Part of knowing your power means knowing who your allies are and not hesitating to call on their assistance. Yet once the Moon enters Aries Monday and begins to square Mars and Pluto in Capricorn, the feeling tone of the day may shift to some species of lone wolf/go it alone.

Try not to let yourself get caught in that one. Reach out to others. Let this powerful square aspect focus your determination — and then remember how little is brought to fruition by one person, and how much is accomplished even with modest cooperation. If there is a need for leadership called for in the equation, that would have your name boldly inscribed on it.