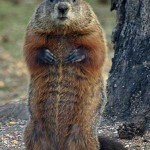 Notes from a Resonant Universe — Cosmophilia Feedback is In 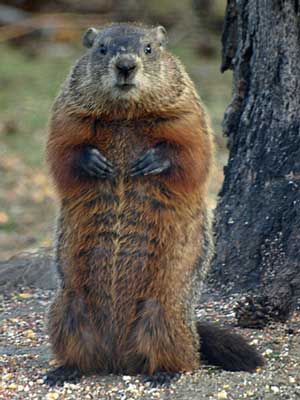 Not your ordinary wildlife — the groundhog is the largest member of the squirrel family, who can eat your whole garden. Photo from Earthsky.org.

According to Ted Andrews, author of Animal Speak, they are true hibernators, whose body temperature drops to 40 degrees F, down from the usual 96 when not hibernating. Their pulse drops from 110 beats per minute to four or five beats — a yogi-like trick of slowing down their metabolism and conserving energy.

So distinctive is their hibernation that Andrews describes them as embodying “the mystery of death without dying, trance and dreams.”

I’m not sure where I acquired that incorrect fact in my original article on Imbolc; I’m still trying to figure that out, since the original article (in StarIQ.com) had a great research team on board. In any event it’s now Groundhog Day.

Apart from the ridiculous tradition of live-televised weather divination, groundhogs can represent signaling boundaries, which they tend to keep to a minimum. Their main boundary is their home, that is, their tunnel.

The groundhog “is also a symbol of opening fully to the dreamtime, the heavy winter sleep, allowing the individual to use the dreamtime more powerfully. those with a groundhog totem will find that there will be increasing ability to develop lucid dreaming — especially during the winter. Any time groundhog shows up, the clarity and power of altered states will be amplified. Dreams will become more significant.”

This time of year is called Imbolc, which means “in the belly of the stars” or “in the milk,” noting the resonance between the name of our galaxy and many of the stars that we see. In the Northern Hemisphere, Imbolc is the midpoint between winter solstice and spring equinox; the days have already been getting longer for six weeks. In other words, winter is half over, and in the Southern Hemisphere, the summer is half over.

With the Sun at the midpoint of Aquarius, the Leo Moon will make an opposition to it on Tuesday, Feb. 3, at 6:09 pm EST (23:09 UTC). The Moon-Sun opposition is speaking to many planets. It is in aspect to Mars, Pallas Athene, Jupiter, Chiron, Uranus and Pluto. Still, this seems to be a calmer setup than the Cancer Full Moon one month ago, if anyone recalls that emotionally dramatic scenario.

Even so, the Full Moon is a time to move gently and feel the energy rise to a crest and then let go. Sometimes it’s necessary to plunge right into the wave and come out on the other side, which is another way of working with the energy rather than against it. There is a strong current, particularly with the Moon conjunct Jupiter and trine Uranus. The Moon is in a rapid, strong flow of energy between those two enormous planets, located in fire signs. Pluto is involved — the Full Moon is in a quincunx, or 150 degree aspect, which grants depth and a soulful quality to what might ordinarily just be glamorous and dramatic.

Mercury remains retrograde in Aquarius. At the time of the Full Moon it will be approaching a sextile to Saturn and a conjunction to Vesta. This aspect describes holding open space for what you want to happen. It’s suggesting that you make a conduit or vessel for what you want to create, and then allow the natural forces to flow through or fill the urn, most likely with fire.

Whatever this symbol of channeled energy or contained fire represents, it’s enough to light the way, hold warmth and provide wisdom for many people.

16 thoughts on “Peak after Peak – the Leo Full Moon”