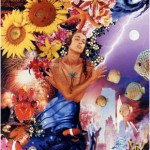 Lately I’ve had a few people tell me I’m too much — too outspoken, too sexual, too pissed off. I thought I would write something about this, about the gall of others to expect people to prune themselves just because it’s convenient for them, when I remembered that Jeanne Treadway wrote a fine article for us back in the very early days of Planet Waves. Indeed, Jeanne’s voice is one that helped set the tone and the ethos of Planet Waves, and I am happy to re-publish her article “Just Too Dang Much,” first published ca. 2000. — efc

I’m one of those bad-broke, rode-hard-put-up-wet kinda gals. You know ‘em. Fire sparks from their eyes, smoke streams from the nostrils, and they’re just generally a handful. Sometimes gentle, sometimes a cross between a treed bobcat and a lady. Always keep you edgy wondering how to approach ‘em. I don’t know if I was born this way, but it seems like it.

“Talisman” by Via at Studo Psycherotica

My opinion is that the world deserves me just the way I am on account of the way it treats me and everything else. I’m kinda like one of the Earth’s walking consciences, always reminding people of what happens when they treat other people mean. I’m sure you know someone like me. I’m strong, opinionated, pretty, lucky, independent, self-assured, smart.

Oh, I ain’t a stunner dripping with money and gently holding the cojones of the world; no way. I’m one of them strong, independent types who’s got everything nobody else really wants. I’m one of those bitches who makes everybody nervous and that everybody calls touchy or crabby. I am too damned much for anyone to handle, or so they say.

The first time I remember having that odd little “too” adjective applied to me was when I was about five and was told I was too young to understand, too small to do it, and too hard to get along with. In the first case, a five year old should never be sacrificed to nuns for education. Secondly, I could ride any horse I got on, sort of. And finally, if they would talk to me reasonably I might not be so damn hard to get along with. But all this was just a portent, a hint, of what was coming.

By the time I was eight, I was too smart, too dumb, too much a tom-boy, too serious. I kept the smart, dumb, serious part and became known as Little Miss Priss to my family by age ten. Puberty found me weighing in at 85 pounds, heft that was stretched across a five six frame, with a mouth full of teeth that wouldn’t fit until I was about twenty, braces, and the self-esteem of a mouse. No tits, no hips, just elbows and knees and braces. Gorgeous from any perspective. My mom always told me I had a great smile, though. Very small comfort to a human tree.

Kids were mean and stupid and I found solace with very old people; they had something to say and knew how to listen. The first love affair I ever had was with my grandmother who died when I was nine. I played dominoes and jacks and could skip high waters/hot peppers with the best, but I also read forty to sixty books a semester from second grade on. I loved Hank Williams and Patsy Kline when Elvis was king. Vincent Price, who was better than John Wayne every hoped to be in my book, introduced me to Poe. Our twit of a librarian refused to allow me to check out the collected works of that dear alcoholic because I was only in fourth grade, but she poured the first shot in a life-long addiction.

I knew rocks, snakes, trees, water, rabbits, cats, and horses had souls; I was uncertain about people. I wanted to be a ballerina from age six until I dropped that nonsensical dream on my twenty-eighth birthday when I did an arabesque and semi-permanently sprained my ankle.

I fit well in high school, too. I had to take the high school entrance exam twice because I scored higher than the male genius and the first score was obviously a fluke. By fourteen I had fallen in love with a man who was to fill my dreams to the present, some thirty years later. We were an item during my twenties, but that story best fits in later. I dated three guys in high school, none of them him, and scandalized the town with my supposed promiscuity (you were only allowed one man every four years back then). I wasn’t selected to cheer for the team because, as the kind president of the pep squad told me, they were afraid I might become too egotistical. My algebra teacher made certain I was never elected to senior honor society or chosen as an honor student because I was too loud in the halls. I was asked to run as secretary of the senior class, but wanted to run as president. Girls names were never entered for that position so I didn’t get to run for anything.

I kept thinking I was going through a phase, that some time in the near future I would be just good enough. In fact, it wasn’t a phase and it expanded to include too sensitive, too loving, too good, too bad, too intense, too modern, too wild. Let’s see, what did I miss? Oh yeah, too sad, too happy, too mad, too glad. Too much a hippy, too old-fashioned. Don’t get confused here, these were certainly not words I applied to myself. Good-intentioned professors, friends, therapists, bosses, unknowns told me these things, for my own good, of course.

What the hell is a twenty-year-old supposed to do with this kind of knowledge? I thought love might help me figure it out. Believe me, it doesn’t. It just adds to the list. Drugs don’t help either. They mirror the words back onto your soul and write them into your heart with a bitter, indelible ink. Alcohol is a socially acceptable method of drowning, but that leads to alcoholism and, dang, that’s a tough one to get rid of. Thank God for the rare soul who believes in you, without strings, without wanting to own or change or manipulate.

I’m not certain when I started thinking I might be okay to look at, that my nose wasn’t too big or my cheekbones too prominent or my lips too big. Somewhere in my mid-thirties I decided my eyes were really quite nice, but pretty? Never. In fact, I settled for exotic. That’s better, anyway, isn’t it? I think getting sober at 32 unlocked the gate for several revelations, including that I was bright, could be charming and okay to look at, and might have something of value to give to friends and lovers. It’s a theory I’m still testing, twenty years later, though.

Briefly back to the love of my life. He just got married for the second time, obviously not to me, and that’s because, he says, he would rather be comfortable than passionate. Ergo I am too passionate. He’s probably right that our marriage would have been tough, but damn him anyway.

What the hell is wrong with being too passionate, too sensitive, too everything? Why is this silly little adjective thrown at me in explanation for each aspect of me? My beloved sister once told me I was too supportive. Jeezo peezo! Was I supposed to become less smart, less pretty, less lucky, less sensitive, less passionate? Would that ensure that someone would love me? That I would find a place I fit in this world? That the pain would abate? What was I supposed to do with this stuff? How do people want me to react, to change? I was simply befuddled by this. It ebbed and flowed. I could go a whole three, maybe four, months without someone using that adjective to describe something I had just done, some feeling I had just expressed, some thought I had just expounded. But without fail, that well-intentioned look would descend on someone’s face and the next “too” would pop out.

It’s an interesting phenomena, this “too” stuff. When people say “you’re strong”, it’s a compliment. When they say “you’re too strong”, it’s a criticism. It implies that you are supposed to do something about it, that somehow you have stepped over an appropriate, social boundary and that, if you were a “good” person, you would do something to correct that faux pas. When you first encounter it, it stings but you don’t spend much time thinking about it. You have no idea that little word will become your personal Chinese water torture, wearing your heart away drop by drop. You start hearing that word in every conceivable context. Is there something wrong with you? Do you have some major deficit? Were you born missing some key ingredient that would allow you to understand this too stuff? The weight of that silly little word is extraordinary because not only is it used to put you in your place, it is also invariably used to explain why someone treated you abominably and why you should be big enough or strong enough or gracious enough to let that rudeness pass. In essence, because you are “too” you have to accept every form of abominable behavior imaginable. People are allowed to and, according to their moral precepts, should bring your “too” behavior to your attention, just in the off chance you were unaware that you’re a “too” person.

I spent years shaving off parts of my personality. You know, trying to speak softer, act nicer, be stupid. I even wore suits and coiffed hair. Jeez. I figured if I kept shaving I’d eventually get to the “good enough” part and then everyone would start saying I was just strong enough or smart enough or whatever. It doesn’t work that way, but dang it takes some learning to figure it out.

Finally, though, it comes to you. They ain’t never gonna be satisfied. They just need to break your spirit for some reason. When you get to that understanding, and believe me it don’t come quick, you have yourself a year-long cry, dust off your boots, and start living for yourself again. Now, just like I love those delicious little power surges they call hot flashes, I glory in being too much. It reminds me I am vitally alive, full of piss and vinegar, raring to go. It lets me know that they haven’t broken me to saddle yet. Oh sure, they still want to but, until they figure out that wounding an animal’s pride only makes it mean, they’ll never get this mare in their corral.

9 thoughts on “Just Too Dang Much!”