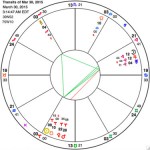 If you want to handle today’s grand fire trine aspect pattern in a constructive way, slow down and pay attention. With so much in fire signs, there will be lots of impetuous urges going around, and little sense of restraint. 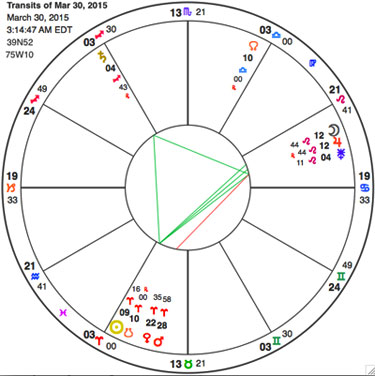 Grand fire trine. The odd point out (toward the top right of the chart) is the North Node in Libra.

I have introduced the topic of the Libra eclipse in an edition of Planet Waves FM that’s currently going around.

I’ll have more to say about it this week in various places, including Planet Waves FM and TV. For now, be aware that it’s happening, and that it’s likely to arrive with a heightened sense of just about everything over the next six days or so.

For now I would like to point out that there is a grand fire trine in the sky, which is being highlighted by the waxing Moon conjunct Jupiter. This happens at 3:15 am EDT (08:15 UTC), though we’ve already been feeling its momentum and will be through the day tomorrow and into Tuesday.

There are many planets currently in the fire signs — in Aries, there’s the Sun, the South Node, Eris and Mars. Mercury will arrive Monday.

In Leo, there’s Juno, Jupiter and the Moon (and one slow-moving point behind the scenes, called Sila-Nunam).

Then in Sagittarius there’s Saturn, along with a great many minor planets, including many collected around the Galactic Core late in that sign. So, that’s a lot of fire, and the Moon is picking up on all of it now.

Grand trines are neither ‘good’ nor ‘bad’. But they are powerful, and if not handled well, as in consciously, they can be destructive. If you want to handle this particular aspect pattern in a constructive way, slow down and pay attention. With so much in fire signs, there will be lots of impetuous urges going around, and little sense of restraint.

In the most positive reading of this aspect, it can be visionary, and that vision will need to be followed up by persistent, devoted action. There’s a whole lot of start in this pattern, though that does not necessarily lead to continue or finish.

We get more start energy as Mercury enters Aries Monday. That is like a bright idea that could really use some follow through. We get some persistence as Mars leaves Aries and enters Taurus on Wednesday.

All in all, there’s considerable momentum on the psychic fields right now. Take things one step at a time and when in doubt, revert to Saturn. Slow down the movie. Speak and think in simpler steps. Notice when you’re getting carried away.