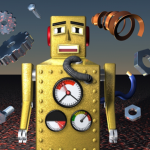 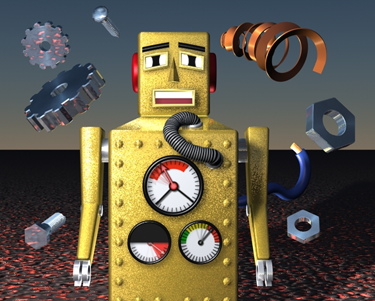 The exploding robot, originally drawn for a blood pressure medication advert, now the story of our lives.

Other women have run; she has done the best so far and is the strongest candidate of what is, so far, an admittedly extremely weak talent pool. I think most people would say she’s a bit mechanical; a bit robotic. Nobody can figure out what she stands for. She is functional but seems to lack depth and meaning — that’s a robot for you.

In Thursday’s Core Community edition of Planet Waves, I brought up the topic of the Uranus-Eris conjunction in Aries. This conjunction will be building for a while and then will be exact in 2016 and 2017 — the year of the election and the winner’s first year in office. Notably, the 2016 campaign will be the most robot-infused of them all, using Twitter, Facebook, email, YouTube — all your favorite automatons.

Among its many talents, Eris is subversive. In fact Eris will subvert anything that can and needs to be undermined, and that would include what is happening to people as a result of having their thought processes reduced to a fill-in-the-blanks form that is compatible with an Android.

I’ve been contributing to and participating directly with the Internet for nearly 20 years. It started as a broadening and expanding process. Very nearly everywhere, it’s been reduced to a dumbing-down process. You can only do something about that if you notice it.

The Internet and our relationship to it seems poised for major changes as this big Eris aspect develops. To me the current Sun-Eris conjunction and the now-forming Uranus-Eris conjunction says: claim your humanity back. Indeed it may help us explode the robot within, and all its scripts and programs.

To get there, you may need to feel the disturbing extent to which something about you has been taken from you. If you feel bossed around by your ‘smart’ phone, responding to it like it’s a crying child, that is a clue.

Apropos of the blend of humanity and technology, the Moon is now in Aquarius — where, by the way, it was for Hillary’s big announcement Sunday. (That in my opinion is a lot better for her than a very late Capricorn Moon, which almost happened.)

Monday the Moon will square Mars (motivation, assertion, frustration, anger). Then it will make an opposition to Jupiter, which may appear as some exaggerated situation — individual interests versus group interests, for example; but it’s not as far-reaching as it seems.

Then into Tuesday that Aquarius Moon will make a series of sextiles to many planets now in Aries. Sextiles are the ‘here is a tool, do what you can with it’ aspect. They don’t compel action like a square or opposition and you don’t slip on them like you do a trine. They are like having a firm, confident grasp on something, and applying whatever that is if you want to.

Sextiles say you can get a grip. These days it’s worth having, but you know, not too tight. The most useful approach seems to be halfway between grasping and letting go.

21 thoughts on “Monday Diary: Exploding the Robot Within”