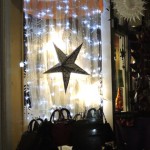 Have the holidays got you down, or wondering about the meaning of life and capitalism? This article by Eric Francis does its best to make some sense of the Christmas holiday madness.

The other day I had my dad on the phone. We were talking about media theory, one of my favorite subjects (which I happened to be writing about that day, and needed help). It’s a topic that he’s somewhat versed in, as a communications professor. At one point he was poking fun at me for being totally oblivious to the holiday season. 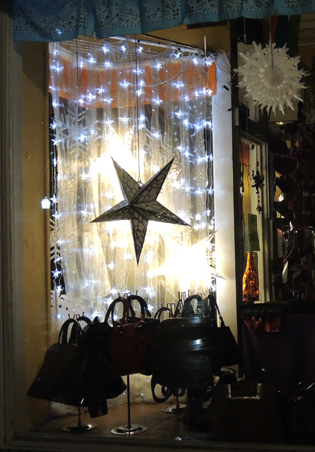 Store decoration on corner of Wall and John, Christmas Eve, Kingston, NY. Casey points out that the five-pointed star is often displayed in its ‘satanic’ rather than ‘pagan’ position.

He’s correct, in that I’ve made it my business to participate as little as possible in the cultural rituals that surround the winter holidays.

They used to be just dismal for me, particularly as an adult. I would experience actual depression at the annual onset of Christmas — a feeling I could not control or even seem to influence, which was scary.

You know, that feeling of carols playing over the Muzak channel in supermarkets, decorations going up, and all these things that people would do that seemed to make them happy, but to which I could not relate. Everyone driving around with a chopped-down tree lashed to the roof of their car, rushing home.

At least my dad and I can kid about it, and at least he doesn’t take it personally. He knows I’m involved in a project every year at this time, one that (perhaps conveniently) precludes most direct participation — such as traveling. As for buying gifts, I prefer to do that at other times of the year, and I prefer that it be random, rather than associated with specific events.

Lately I’m not as mortified by the holiday season as I used to be. This is a huge improvement in my life. I even look forward to the holidays, so I can assure you that there’s sincere hope for getting over even the worst issues you might have with this time of year.

When I moved back to the United States from Europe seven years ago, I made friends with a guy named Dominick Vanacore, for whom the Christmas thing is absolutely sincere. That was my personal turning point. It’s 4:15 am on Christmas Eve and I’m sure that he’s left his outside sound system on, broadcasting Christmas carols to the neighborhood outside his cafe. That was my first point of contact to the whole holiday business not being some form of culturally inflicted torture.

Things have improved for me significantly in those seven years, and I have a local family that I hang out with every Thanksgiving and Christmas who I really look forward to seeing. It’s a truly social thing for me, a break from the work I have this time of year. It’s not vaguely associated with obligation, buttons getting pushed or some contact with the past. Nobody cares when I get there or when I leave (I usually leave last). I know they are always sincerely happy to see me. 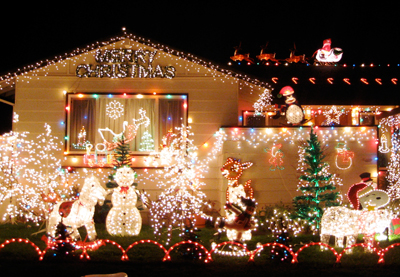 As seen in California — there’s always one house in every neighborhood designed to prove how little Christmas spirit everyone else has. The only snow that’s ever fallen on this house has been electric-powered.

Basically, I’ve designed the Christmas thing in such a way that it works for me. I’ve done so knowing how much cultural license I have to take to do that.

This year I got bold and bought Christmas gifts for my staff, but due to some excess activity in my office and someone sustaining an injury over the weekend, they are all sitting out on the floor, in their shipping boxes, perhaps to send this year late, perhaps next year. They are actual Christmas ornaments, nice ones, and funny cards, though there’s a joke involved, all of which appealed to my creativity.

What remains of my near-horror with the Christmas dimension is empathy for what people who don’t groove with the holiday season are going through. I know how horrible it is to have, or feel like I have, no place to go. There were years when the entire town would empty out and everyone would go home, and I would feel cast off, adrift and waiting for the whole thing to end. During one of those incidents, my buddy Christopher McGregor took me out for a ride and played me The Junkie’s Christmas by William S. Burroughs, which tapped me into the ‘alt’ side of the season.

One year at Thanksgiving, I think it was around 1997, I was at home by myself, utterly lonely and in actual despair. I was sitting at my usual place — my desk, ready to curl up and die. Then my phone rang.

It was one of my readers, someone I had never heard from before, calling to cheer me up — as if she knew. With no possible way to know. It was like getting a phone call from God, one of a very few times that’s happened.

I’m aware that there are many people in that situation, who have no idea where to go or what to do, sitting alone in their rooms, wishing for contact. I would offer a reminder that there are plenty of places where the castaways get together, everything from church dinners to events at the local fire house to families of friends who would have you over. You may have to be bold and invite yourself. It’s the 21t century — many places, that kind of thing is finally OK. 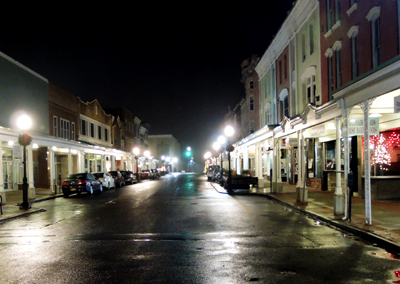 Uptown Kingston is modestly decorated this year, seen on Christmas Eve, 2014. The wet streets are fun to photograph.

If you live alone and are out in the sticks and don’t have transportation, at least call around and try to find someone to get you to some public gathering.

There are people who would rather chop off a finger than know that you’re somewhere you don’t want to be. Have a little courage, poke around the Internet and dial your phone. Keep making calls till you connect. Even if you can’t, at least you tried.

There are plenty of people who participate in the whole ritual out of obligation. They would rather be home and sit the whole thing out reading a book or baking corn bread. It’s the “the holidays would be so nice, if only I didn’t have to go anywhere” feeling.

Instead, they have to visit relatives who set off all the dusty old neural pathways in their limbic system that instantly revive various childhood horrors. If that is you, I suggest hanging out with little kids and animals, wherever you go. And there is always one other weirdo who feels the way you do. She might be 88 or he might be 13. Look and listen.

Then there are the people who know it’s all a ritual but who play along because they like it, or because other people do. That’s one way to handle things. Plenty of people do it for the kids — if you have kids, you pretty much have to take part, and it can be fun.

Others are revolted by the commercialism this time of year — the Black Friday DVD player riots, going into debt to buy gifts, the “no gift is ever enough” thing, the “it’s all a business” business. Plenty use the abundant alcohol that’s around to numb out.

There are those who long to be with their families, who cannot get there, who cannot afford to make the trip. Or their families are scattered, dispersed or disordered — or in a state of hostility and standoff. There are those whose families are long gone, or whose favorite relatives are dead and this time of year, conspicuously missing. This is especially sad if it’s the first or second Christmas that they’re gone.

Many people are absolutely overjoyed that they get to be with their families or friends. I know someone whose son is going to be home for the first time ever. I don’t know the backstory — I just know she’s very happy about it. 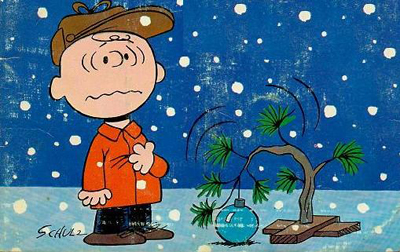 Charles M. Schulz got it.

There are troops stationed around the world, wishing to be anywhere but where they are. Lou Reed paid tribute to this in his song Christmas in February.

There are all the cops and firefighters, EMS workers and ER staff working on Christmas Eve or Christmas Day. There all the people who keep the power grid running, holiday lights twinkling in their windows miles from where they are. There are the people driving buses and trains, and people serving in restaurants so others can have a good time. If you go out, tip generously.

There are expats all over the world who could not make the trip home. Fortunately, Christmas season is a bit muted in most other countries, compared to its equivalent in the U.S.

There are people who tune the whole thing out, who don’t notice or for whom it’s not meaningful. There are those like my teacher Joe who for years would burn the skeleton of a pine tree in his backyard, celebrating Yule his own way.

And there are the people who feel totally, hopelessly alienated by these holidays, experiencing existential grief made all the worse because so few people seem to understand. I get it, and my heart goes out to you.

26 thoughts on “Every Possible Experience”