Today’s archive selection features Eric’s response to a reader who’s trying to figure out if his grandfather’s repressed sexual urges are funneling into his reality, somehow live through him. Nessus and Quaoar offer some clues. This Q&A first appeared on Eric’s Astrology Secrets Revealed series on Jonathan Cainer’s site on Feb. 3, 2006.

Editor’s Note: Below is one of Eric’s answers to a reader letter from his Astrology Secrets Revealed series on Jonathan Cainer’s site. It was first published on Feb. 3, 2006. — Amanda P.

Your yearly horoscope is spot on with what I am dealing with right now, Eric. Absolutely on point. As I am a Libra, you mentioned going into the past. Is it at all possible that this past that I’m dealing with isn’t mine, but my grandfather’s? He had some serious issues with his sexuality that he never really confronted, which even lead to some abuse he passed down to me.

I have accepted this, forgiven both him and myself where applicable, and have made a point to be honest and open with my own sexuality, so as not to let repression deprive me of my mission in this life.

Long story abbreviated, I am now dealing with my own issues of possible sexual addiction, or, at best, defining my own parameters between healthy sexual expression and unhealthy sexual expression. My problem is, I feel like I have an entire lifetime of MY GRANDFATHERS REPRESSED urges funneling into my own reality, as if he is trying to somehow live through me. 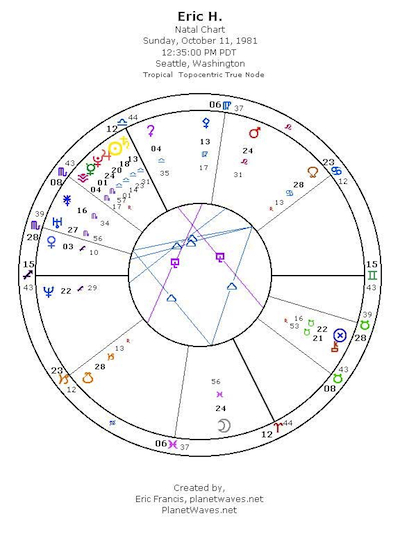 Could this be? I only have the nerve to ask you this long drawn out question because I have a sincere respect for every aspect of your work. I know it’s a whopper of a question. Even pointing me in a helpful direction might help me break through this barrier. That is all I ask.

With my love,
Eric H

I could offer a very long answer, but I would rather start with some basic ideas, and concepts from your chart, and perhaps engage in a dialog. Before I speak to your situation specifically, I feel it’s important to begin every discussion of sex and sexuality with the reminder that these things are natural.

I recognize we live in a world where the President of the United States can say in the State of the Union Address that we are a stronger nation because our children are taught abstinence (a program which does not actually succeed at any of its goals, only at creating chaos in young people).

The fact remains, sex is a natural experience, desire is natural, reproduction is natural. It is guilt and repression that are artificial. But part of the crisis of sexuality in our culture involves the fact that these two sets of facts are very often reversed: it is guilt that is called natural and sexuality that is described as an abomination.

The effect of this is to divide people against themselves, and then they are subject to easy conquering. The first step in reversing these divide-and-conquer tactics is to reverse these two interpretations and begin to get ourselves back into a natural state of being. It seems more than likely that your grandfather was never able to do this. Repression has an instrument, and that instrument is almost always guilt.

We actually began discussion of your question last week, in the third question I took, from a mother who felt that her daughter was in some way living out her life. That was an introduction to the ways in which it would appear possible for the material of a parent or other ancestor to be passed onto a person. There are many — but the culture of a family and family dynamics must be counted as tops among them.

Astrology can help reveal this, and we will take a look at what may be in the picture.

The distance from a grandfather to a grandson is nearly no distance at all. This is because to a great extent, in addition to lots of DNA, you share an environment: you have your parent involved as a common factor, as well as their siblings, and the grandmother. All the attitudes, values, beliefs and feelings exist like a culture growing in a jar.

It may also be true that the same things from earlier in your family’s past influenced both you and him in the same ways. In other words, you may share the influences of another ancestor with whom you have something in common. It is possible, indeed, I would say very likely, that an event lost to history influenced you both.

What is important in all of this is how you consider and handle the present — how you conceptualize the past will be instrumental in how you do this. In ascribing an influence or feeling to “your grandfather,” you are describing a concept of the past, as you experience it now. It is actually your experience, but in your reality map, you say okay this feels like his territory, or something that has his feeling on it. This is another way of saying it’s shared territory, because it’s actually your life, your consciousness, and your perception.

Here is where astrology may be handy, at least as a point of beginning. It is a map to the past, the present and the future that is 100% applicable in the present.

Our exciting new Midyear Reading on forthcoming astrology, including Jupiter in Libra, is now available for pre-order — and you can get all 12 signs for just $47.

I would like to point out a few basic things about your chart. Let’s start with the 8th house: the house of sex, death, power trips, jealousy — and legacies like the one you describe.

Cancer is on the cusp of the 8th house. The North Node of the Moon is also in this house. That combination makes it an extremely compelling house for you to experience; we can often feel like we are riveted to the themes of the lunar nodes, and the North Node puts strong emphasis on the 8th. The presence of the sign Cancer suggests that there is something in the family emotional environment, and ideas about nurturing and nourishment, that is involved.

This is to say, the ideas of sex and nourishment are linked in your chart. They SHOULD be linked — sex is an important source of nourishment, one that is often denied as an idea and which people deny to one another.

But looking through the minor planets, you have one of them located on the North Node, in the last degree of Cancer. That would be Nessus — a planet that addresses abuse legacies. Sexual abuse takes many forms, and one of them is repression. It does not need to be a perpetrated sexual act; it can be of course, but it can be a psychological climate that instills pain, struggle, guilt and any other form of psychic difficulty. And this planet is a factor in all the affairs of that house however you interpret your North Node.

One of the most interesting facts about Nessus is that it deals with questions of potentially inappropriate sexuality. In other words, with Nessus and its sexual themes, there can and often is a gray area. And that is the territory that you are exploring. In effect, the buck stops with you, as you take this up consciously. You are the one who needs to determine where you stand, and to make up your mind about what is right and wrong for you, remembering that you are dealing with some kind of legacy burden. And that legacy could go back many generations.

The Moon is the ruler of the North Node in Cancer and the 8th house. So to find out more, we can look to this point. The Moon is in the 25th degree of Pisces.

Note its rather intense aspecting: it makes exact quincunxes (150 degrees) to Mars and Pluto. It is under constant tension, pressure, and a kind of overdrive alertness. I think this is the clearest image of the constant push or pull of these feelings that you describe.

To top this off, you now have Pluto squaring your Moon, so you could say it’s all coming up now. I strongly suggest you look at Chiron’s transits to your Moon: check when Chiron was at 25 degrees of any mutable sign.

Last point for today: Quaoar. This is a newly discovered planet (2000). In an earlier article, I proposed: “Named for a Native American creation deity of the Tongva people from what is now Southern California, Quaoar’s placement gives an intimate portrait of the dance of the family’s emotional process and its impact on us. Quaoar speaks to the rhythms and choreography into which we were born, as these manifest within the family pattern going back generations. It points to how we dance to the music of our own creation more or less unconsciously, and suggests that we have a conscious relationship with our personal creation mythology. It is very helpful in doing family-of-origin work.”

Here is the one thing that I notice about this planet’s placement at 14 degrees Scorpio in your chart. It is conjunct Juno, a planet that addresses the theme of marriage. I would propose that the legacy of which we’re speaking here is contained, at least in part, in ideas about marriage.

This may be the biggest clue of all, and it may require the most detective work. But I think you need to go through every history of every marriage and every idea about marriage in your family that you can possibly find — and you will find the seed of this pattern. Start with your own ideas; then your parents, then your grandfather and grandmother; and take it slowly from there.

One thought on “Archive Pick: My Past, My Grandfather’s Past, or Both?”