Today’s archive pick is one of Eric’s answers to a reader letter from his Astrology Secrets Revealed series on Jonathan Cainer’s site. “Wondering Wife” writes in about her husband’s cross-dressing, and Eric offers a grounded invitation for her to get to know him better.

Editor’s Note: Below is one of Eric’s answers to a reader letter from his Astrology Secrets Revealed series on Jonathan Cainer’s site. It was first published on May 27, 2005. — Amanda P.

Can you please tell me what it is in a particular chart which indicates a male prefers to dress as a female? 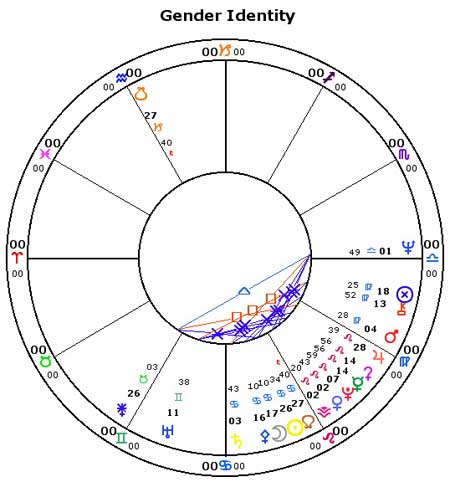 Chart for the husband of “Wondering Wife” — no birth time.

I’m going to start with my usual non-astrological approach: cross-dressing is one of those things that people do.

It is so common that we simply have to recognize that it’s normal — because it’s in the norm.

I’m not saying it’s as common as eating French fries, or that everyone approves; rather, that many people cross-dress, many start quite young, and many do it their whole lives.

For women cross-dressing has always been a sign of liberation and equality. The 19th century writers George Elliot and George Sand, not only dressed as men, but also adopted male names. Their writings achieved great success and they both led sexy, heterosexual lives.

The designer Coco Chanel brought boyish fashion for women to the mainstream back in the 1920s. In the Age of the flapper and the suffragette, women were throwing off the shackles of womanhood by cutting their hair short and donning pants, and for women things have continued this unisex path to this day.

It’s only potentially a big deal when a guy wears clothes normally worn by a woman. This is because when a woman dresses like a man, this is a sign of achieving equality by literally taking on the mantle of ‘the man’. These days, women who dress in feminine clothes are not treated with seriousness, and most often with outright derision. Madonna even wrote a song about it:

Girls can wear jeans
And cut their hair short
Wear shirts and boots
‘Cause it’s OK to be a boy
But for a boy to look like a girl is degrading
‘Cause you think that being a girl is degrading
But secretly you’d love to know what it’s like
Wouldn’t you
What it feels like for a girl?
— Madonna, ‘Do You Know What it Feels Like for a Girl?’

Still, I can see where it would be intriguing, curious, or even a bit disturbing if your husband wears women’s clothes, and you have not said much about the context of his proclivities.

Cross-dressing is sometimes related to gender identity. Sometimes people do it just for fun. If you’re looking to astrology for wisdom, consider this. One thing that astrology tells us straight away is that we each contain ALL gender identities. Everyone has Venus and Mars in their chart; everyone has the Sun and the Moon. In this respect, astrology takes a radical position. It is in a sense blind to biological gender classifications. All energies are available to anyone. They mix and match differently for everyone as well. We all possess a truly unique gender identity.

Your husband has an absolutely intriguing chart. We don’t have the birth time (though it would be nice), but there is so much to see and feel, we can do fine without it. Look at that concentration of planets. That alone tells us we have an intense and potentially unusual person on our hands. Look at how these planets fall into what are arguably the most feminine and masculine signs (respectively, Cancer and Leo). You just don’t see this kind of concentration every day, and I’ve never seen it appear like this in those two signs.

To make things far more interesting, the ruler of Cancer (the Moon) and of Leo (the Sun) are not just in a conjunction (the New Moon), bringing them together — they are forming an eclipse, a kind of super-conjunction which was exact within mere hours of your husband’s birth. Eclipses will have real impact within a month or two of a birth; he was born right in the eclipse. And, checking my American Ephemeris of the 20th Century, I see that in the summer of 1944 there were FOUR eclipses — two of the Sun, and two of the Moon.

The upshot of this all is that your husband is a very, seriously, majorly intense person. It’s not that he cross-dresses. It’s that he was incarnated with some enormous amount of both male and female energy, of which he is highly aware and feels at every moment, as well as being born with more momentum than an avalanche in progress.

May I suggest you set aside the question about cross-dressing for a while and really, truly make an effort to get to know this person? I can tell you that he’s probably yearning to be known, understood, felt, believed, and heard: there is nothing ordinary about him, but there is quite a lot that is subtle, and as he starts to express himself, more is going to come to his awareness.

You might want to start with asking him what the years 1988 through 1993 were about for him — the untold story. Those were, by the way, the years that Chiron came through Cancer and Leo and touched all those planets, and the transitions and vents around this set of transits will certainly have something to say about the deeper nature of who your husband is, what he is dealing with in this lifetime, and what he needs to express.

See what you find out. I reckon it will be interesting, and most likely quite helpful for your husband to talk about.